Contracting Out of IT Work At Global Affairs Canada

The PIPSC Computer Systems (CS) Group is working hard to enforce Article 30 of their collective agreement. This article stipulates that the employer must make a reasonable effort to use existing employees or hire new full-time or term employees as needed before contracting out work to private companies or consultants. Hiring consultants to complete government IT work has a high cost and contributes to the erosion of institutional memory. Unfortunately, despite the new collective agreement language, contracting out of important government work is still ongoing at almost all departments in flagrant disregard to Article 30. One of the most problematic departments is Global Affairs Canada. This report analyzes the policy grievances submitted against GAC between January 2018 and March 2020 for outsourcing of government work that could have been done internally. The data within demonstrates how this department is not following the collective agreement.

Learn more about the CS Group, Article 30 and the Contracting Out Action Team.

The CS Group analyzed a total of 149 tenders or contracts of which 139 were questioned. 139 emails were sent asking the department to describe the reasonable effort that was carried out to respect the outsourcing provisions of the collective agreement.

The CS Group received only 14 responses out of the 139 inquiries placed, leading to a total of 135 grievances filed for this timeframe. Of those responses received, GAC included the following reasons to justify contracting out IT work:

Outsourcing means higher cost, lower quality services for Canadians – less transparency, less accountability, and the loss of institutional knowledge and skills. The GAC case study is a stark example of why Article 30 must be upheld.

Of the tenders and contracts examined, 59 would have yielded an unknown benefit to the department, considering the human resources already available within the department. These were all categorized as tier 1 contracts, meaning their value could go up to $3.75 million each. The combined value of the remaining 76 contracts that we were able to find totaled over $40 million.

Recurring needs should be staffed with permanent positions, not contracted out:

Although the majority of the contracts were for a one year period, a significant number had renewal clauses which could normally extend anywhere from 1 additional year to up to a total of 6 years. A fair number of contracts were to replace another contractor that had been doing the same work. When a human resource need is recurring, the resource hired should be a permanent staff person.

The number of identified resources solicited in these contracts for this timeframe was 490. It's evident that this high number of resources shines a light on GAC's shortage of necessary IT staff to carry out requirements. The types of work most sought after by GAC during this period were for testers, analysts, application developers and project managers. Other types of CS work that were outsourced included architecture, security, programming, help desk, infrastructure, administration, database, web and technical writing.

The following charts show that GAC staffing actions did not attempt to fill the IT positions that they proceeded to contract out.

Most jobs were for the CS-02, CS-03 and CS-04 levels. Less than half of the advertisements stated that GAC would create a pool of candidates for future use. Those advertisements were mostly internal and the department did not attempt to fill permanent, full-time positions to meet their human resources needs.

For example, GAC outsourced 20 resources for help desk work. Unfortunately, during the same timeframe they did not have any staffing advertisements to fill permanent, full-time positions to have the same work carried out. 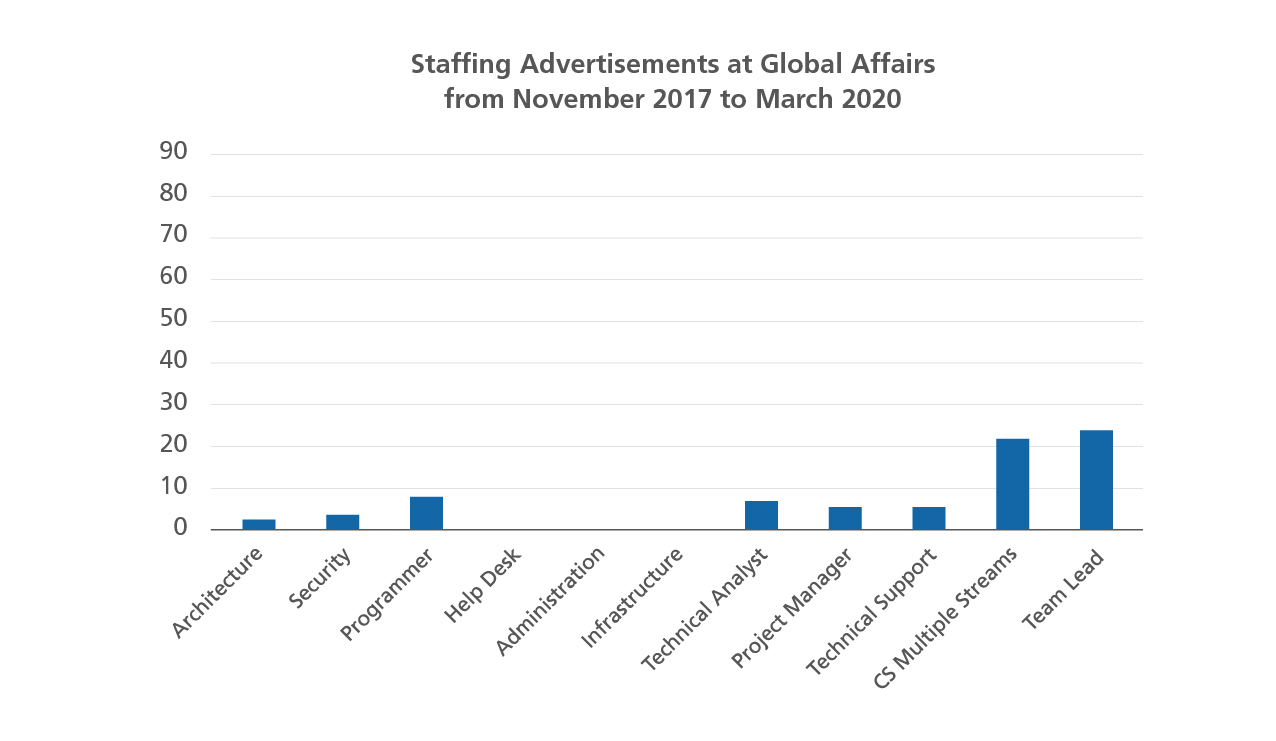 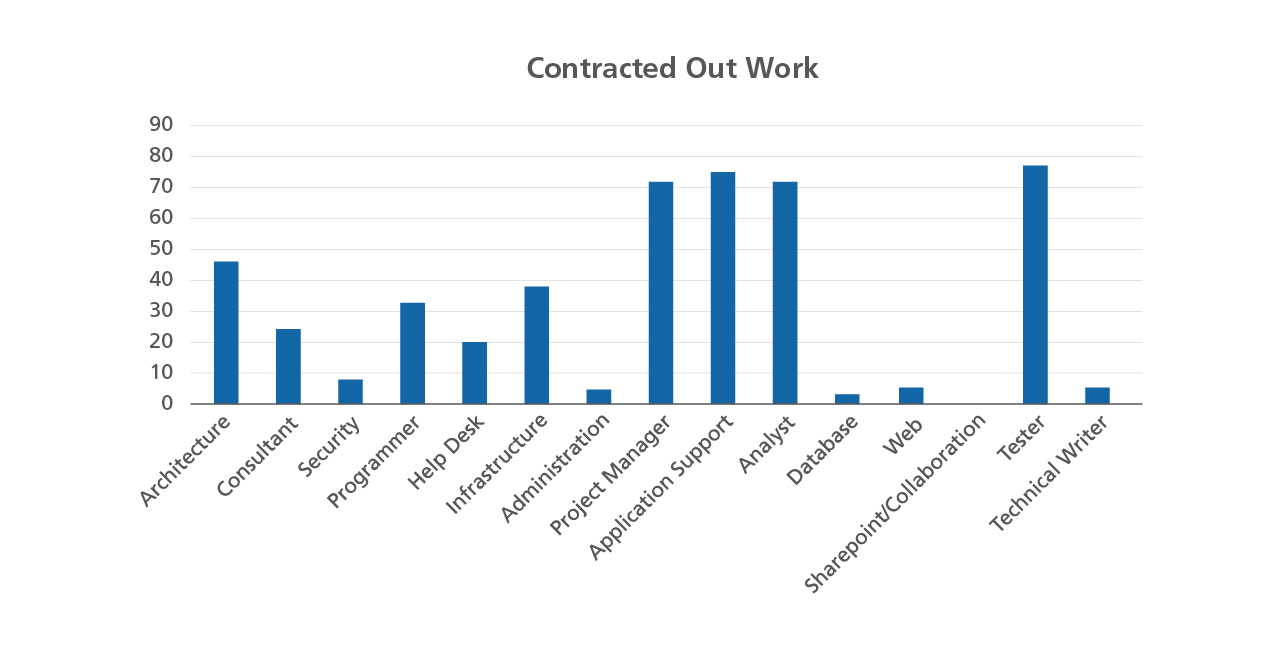 PIPSC is disappointed in the lack of responses to our inquiries. The sheer amount of grievances filed due to no response is very high for GAC and causes unnecessary work for both PIPSC and the Treasury Board Secretariat of Canada.

We’re disappointed that contracts for the same type of work are repeatedly offered at Global Affairs Canada. The repeated nature of these contracts indicates that there may be a permanent need in that department for a regular full-time staff member to accomplish that work.

The results of this internal report clarify why GAC is one of the departments within the Government of Canada that has the poorest adherence to Article 30 of the CS Group Collective Agreement. PIPSC is dedicated to bringing these matters to light and using the means necessary to ensure that the CS Group collective agreement is respected by all departments.

Table - Distribution of CS Members by Department – Departments with 300 or more CS employees as of March 31, 2018