The Institute has a parallel structure by Occupational Group and by Region. Members belong to geographically based Regions, as defined in the Institute By-Laws. Each Region operates under its own Constitution that must be consistent with Institute By-Laws, Regulations, and policies. 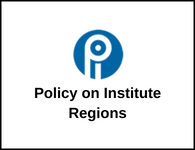 Director: The Regional Director elected by and from the Regional members, as per Institute By-laws, Regulations, Policies, and Guidelines.

Executive: The Regional Executive elected by and from the Regional members, as per Institute By-laws, Regulations, Policies, and Guidelines.

Members: The Regional Regular and Retired Members as defined and described in the Institute’s By-laws, Regulations, Policies, and Guidelines.

Regional Council: The governing body of the Region.

To outline roles, responsibilities, and procedures related to Institute Regions.

A Region may specify additional Aims in their Constitution.

6. Composition of the Region

The Executive shall be composed of the elected Director(s) for that Region, and additional members up to the maximum number specified in the Institute By-Laws, for a term of office not exceeding three (3) years. (Institute By-law 11.1.6) The specific composition of an Executive, their terms of office, nomination procedures, election procedures, and procedures to fill vacancies, will be as defined in the Regional Constitution and By-laws.

In general, the members of a Regional Executive shall have the following duties:

Regional Director(s): present a report on Regional activities to the Regional Council.

Chair: call and preside at all meetings of the Regional Executive.

Vice-Chair: assist the Chair in the performance of his duties, and in the absence of the Chair, perform the duties of that position.

Treasurer: maintain the financial records of the Region as required by Institute policy; prepare a financial report for each Executive meeting and Regional Council; submit a detailed financial statement to the Institute as required; and prepare the request for the annual allowance. Copies of financial reports shall be available to all Regional members, on request.

Members-at-Large: shall perform such duties as may be assigned by the Executive.

Additional duties will be as defined in the Region’s Constitution, or as assigned by the Council or Executive.

The Executive shall appoint an Elections Committee to receive nominations and to conduct the elections. The specific nomination and election procedures should be defined in the Constitution. Elections shall take place at the Regional Council.

Each year, following the Regional Council, the Executive shall submit a copy of the draft minutes, the annual financial report, and the elections report, to the Office of the Executive Secretary of the Institute, prior to the end of the calendar year. A Region failing to file these documents is considered to be not in good standing and will not receive an annual allocation until the situation has been rectified.

Approved minutes of Executive meetings and the Regional Council shall be filed with the Institute.

Detailed financial records shall be maintained by the Region. No more than two (2) years of records are kept in the Region. Older records must be filed with the Institute. (Reference: “Policy on Constituent Body Finances”)

The Executive shall meet as frequently as is required, keeping in mind the maximum allowed in the Institute By-laws and Policies, but at least twice a year. The Institute will fund Executive meetings up to the amount of the approved budget. This in no way affects the rights of the Region to bring in observers, at the Region’s, Branch’s, or member’s expense.

In preparing a budget for Executive Meetings, the following assumptions shall be used:

Budgets should include estimated costs for:

Meetings will be scheduled in accordance with the availability of the Executive members, recognizing the frequency of meetings and the requirement to permit a balance between union activities and family life, as well as recognizing religious celebrations.

Executive meetings, other than closed sessions, are open to any member of the Region. If an elected Executive member is unable to attend a meeting, the Region may invite a member or a Steward as an observer to the meeting. The funds for the absent Executive member will be used to cover the observer’s expenses, at no extra cost. Observers shall not have the right to vote at these meetings.

Minutes shall be taken at all regular and special meetings. The minutes shall contain formal motions, funding commitments, and a short summary of the discussions that take place, and any required action. Minutes are not normally distributed beyond the members of the Executive until after they have been approved at the next regular meeting. However, when necessary, Regional Executive decisions will be distributed as soon as possible to the appropriate individual(s).

Notwithstanding the above, detailed minutes are not taken during closed sessions. For each decision made during a Closed Session, the Regional Executive shall determine whether the record of this decision shall be considered to be an integral part of the Minutes of the open session and, if so, are included in those minutes.

Simultaneous interpretation will be provided by the Institute at Executive meetings when requested by the Executive.

Each Region is governed by a Regional Council. The Council is normally made up of a minimum of one (1) delegate per two hundred (200) Regional members, up to a maximum of one (1) delegate per fifty (50) Regional members (Institute By-Law 11.1.5), as specified in the Region’s Constitution. The Institute will fund the Council based on the anticipated number of delegates (Reference: 2009 AGM F-11).

In preparing a budget for the Council, the following assumptions shall be used:

Budgets should include estimated costs for:

Only delegates to the Council are eligible to claim expenses. Observers may be invited, but the costs are not paid directly by the Institute. However, costs for observers may be paid by the Region, the observer’s Branch, or by the observer.

The expenses of invited guests (other than the President or a Vice-President of the Institute) are the responsibility of the Region, unless pre-approved by the Institute.

A Steward Council is an annual meeting up to one and a half (1.5) days in length, intended to provide training, updates, networking, and a discussion forum for Stewards within the Region. All stewards in the Region are invited to attend. Stewards in waiting can attend one (1) Steward Council prior to attending basic steward training.

A budget for the Steward Council shall be prepared, similar to the budget for a Regional Council defined in section 9, with the following changes:

A budget shall be prepared, similar to the budget for Executive Meetings defined in Section 8, with the following changes:

A budget for shall be prepared, similar to the budget for a Regional Council defined in Section 9, with the following changes:

A total budget of $10,000 for guest speakers will be allocated between Regional Council and / or Stewards Council at the Regions’ discretion.

A Region may publish newsletters using Institute resources, as per the Institute Communications Policy.

Region logos or identifiers may be used provided that:

The Institute retains editorial authority over material published on its web site. Such authority shall be exercised by the Communications Section, under the direction of the President, or as delegated by the President.

Material submitted for publication may be edited, reformatted, or rejected, due to the limitations of the site, other technical considerations, or costs.

Regions shall conduct their business in accordance with the financial policies of the Institute, as specified in the “Policy on Constituent Body Finances”.

A Region may be held responsible for any expenses in excess of their budget.

The Region’s funds remain the property of the Institute, and shall be returned to the Institute upon dissolution of a Region.

Although compensatory salary in these instances will be charged to the Region’s annual allocation, processing of compensatory salary must be done through the Institute’s Finance Section to ensure proper administration of payroll deductions such as Income Tax, Employment Insurance, and Canada / Quebec Pension Plan.

Regions will be assigned Institute employee resources as required for the effective and efficient functioning of the Region. Employee support includes administrative support, technical support, trainers, etc. The type and level of resources provided is at the discretion the Chief Operating Officer.

Regions affected by a merger should be encouraged and, when necessary, assisted by the Institute to negotiate a voluntary agreement on the terms of mergers, including the composition of a new Executive with one Regional Constitution. In the period leading up to the merger, Regions should be encouraged to form an interim Executive or Steering Committee, with delegated authority to act on behalf of members in the merged constituency on matters of common interest, until a more formal process for a new Executive is undertaken.

Where affected Regions cannot conclude a voluntary agreement or Constitution, the Board of Directors, or the Executive Committee acting on its behalf should, within thirty (30) days of the formal merger:

On merger, some Branches may cease to exist or new ones may need to be created. Branches will be re-composed pursuant to the relevant Institute By-Laws.

When Regions are merged in their entirety, all pre-existing Regional funds should be transferred to the newly formed Region.

When a Region is fragmented by a merger or transfer, accumulated Regional funds should be distributed using either:

(i) a formula agreed to in advance by all affected parties or, in the absence of such an agreement,

(ii) a pro rata division based on the number of members redistributed to each of the new Regions, calculated using population data as per the date of the merger.

Branches, and their funding, must also be reviewed and decisions made, if there are changes.

In this Policy, expressions in the masculine or feminine gender, in plural or in singular, may be substituted to give effect to the true meaning of the statement.