In order to ensure compliance with its By-Laws and Regulations relating to the use of English and French(1), the Professional Institute of the Public Service of Canada is providing the following procedures to clarify their implementation.

This policy is also consistent with the Charter of Rights and Freedoms that establishes English and French as the official languages of Canada. Both the Canadian Constitution and PIPSC support and recognize this fundamental Canadian value.

In areas of federal jurisdiction and, therefore, in the majority of our members’ workplaces: 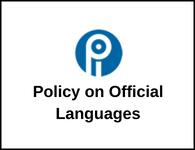 To maintain a bilingual work environment that promotes the Institute’s core purpose, that is, “building community to act collectively to improve our members’ lives.” Members can therefore choose to live and work in English or in French, regardless of their mother tongue.

As a union, the Professional Institute of the Public Service of Canada is committed to providing individually and collectively, in accordance with its By-Laws and Regulations, an environment that encourages the use of both official languages.

The Institute is also committed to defending the rights and values of its members in the workplace. Respect for, and acknowledgment of, the use of English and French as work languages in federal institutions, are the key foundation of establishing the equal status of both languages in the spirit of the Official Languages Act.

4.1 The Institute is committed to creating and fostering a workplace conducive to the use of both official languages. Accordingly, members are encouraged to:

4.2 The Institute’s Board of Directors and its support staff are committed to:

27.1 The official languages of the Institute shall be English and French.