The Balancing Union and Family Life Policy developed by the Institute Committee of the same name and discussed at most Institute events last year was approved by the 2003 PIPSC AGM and became effective on January 1, 2004.

This policy has certain entitlements depending on the type of meeting that is being attended. The entitlements are not a reflection of the relative importance of the meetings but rather a recognition of the time spent in travel status and number of meetings involved.

For clarification purposes we thought we would put the following in a memo form that the Finance Section, organizers of events and affected members could use as a guideline for the new policy:

To that end the following should help clarify the new policies: 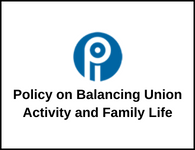 The Professional Institute of the Public Service of Canada understands and appreciates the dedication and commitment of its elected volunteers and stewards. It is a personal choice to become involved in union activities and individuals must ultimately be responsible for their level of commitment to the Institute. Recognizing the time and effort required to provide valuable service to the membership, the Institute, with this Policy, is facilitating the ability to balance union activities with family life. This Policy complements the measures that are already in place which encourage member participation in Institute activities. It is anticipated that by providing more flexibility to meet the needs of the majority of volunteers and stewards, and by creating a more family-friendly union environment, the Institute will expand its volunteer network in order to ensure a more equitable distribution of the workload.

Whenever feasible, members are encouraged to use videoconferencing equipment to conduct meetings.

3. Compensation for Meetings on Days of Rest

This does not include Branch or Sub Group Executive Meetings or their AGM’s but does include the annual Sub Group Chair Meeting. Stewards who complete twelve (12) hours of on-line courses will be deemed to have used a day of rest for purposes of compensation for meetings on Days of Rest under the Policy on Balancing Union Activity and Family Life. Claims for this must include detail as to the meetings attended in the year as well as applicable proof of leave taken (authorized leave form of employer). The paid time off will be equivalent to a member’s normal workday. It would be helpful if any expense claims for the two named meetings have already been submitted.

These days of rest cannot be accumulated and shall normally be taken within six (6) weeks of the meeting.

A member must be required to give up two days of rest to qualify. This means that the member cannot arrive at the meeting without leaving home prior to 7am of the meeting day and cannot arrive home by 8pm of the day of the meeting traveling in the most direct manner. A member traveling within the above-noted time periods but commuting more than 250 km round trip in a day would be entitled to accommodation the night before the meeting but not the night of the meeting. Finally, a member who would otherwise qualify under this policy who decides to stay the complimentary day in the meeting location will not be eligible for this day to be paid since the purpose of this day is to allow a time of rest after the travel.