The year started off with a level 2 grievance related to a change in the scheduling model. We negotiated a variation on self-scheduling that is a cooperative schedule created in 3-month blocks on the east unit. The west unit staff opted to use a fixed schedule as did ICU and the Secure Medical Unit. This is something that we are still talking about working on massaging out the kinks.
The overpayment grievance has yet to be resolved. More information for those members who have been asked to pay back. We will be arranging a meeting after the AGM.
There have been multiple changes in HR, even so we have managed to deal with several issues using the informal process:

The occupational health and safety consultant and the risk manager are no longer employed by the Corporation. Time will determine the impact of these vacancies.

We have 4 new stewards this year from the Group, namely Kathleen Chapman, Kamira Potter, Mike Symyrozum, and Stephanie Tremblay. Lynn Cheverie elected as secretary at last years AGM, needed to step down for personal reasons she has also given up her stewardship. One new steward from the Branch, Mary Hughes, she works in Environment and climate change Canada.

Union Management Consultation (UMC) consists of the PIPSC executive and/or designated stewards and management. This group meets at least quarterly and discuss issues that affect our members it is an opportunity to share information related to how policy or practice broadly effect our members. This may include operational issues that haven’t been resolved at a departmental level. What we don’t discuss are issues related to employee performance grievances or discipline, or collective bargaining. We may discuss issues related to the collective agreement, but these discussions aren’t binding. Issues that have been discussed include

The Joint Consultation Committee (JCC) has only managed to meet once this year. This committee is made up of members of PIPSC, PSAC and management. The terms of reference speak to a quarterly meeting; however, this has been found to be difficult to organize all the parties both union and management. There is discussion around the LPN scope of practice and expansion of LPN’s into the perioperative area. Rest assured we as the union representing Registered Nurses are fighting to retain any position that belongs to PIPSC and no RN will be displaced.   A bit of good news from the JCC, we will be receiving a rebate on our long-term disability payments.  (data sheet is appendix A in the AGM package).

The Advisory Council (AC), consisting of all Group Presidents and Consultation Team Chairs, deals with matters referred to it by the Board of Directors, the Executive Committee or Group Executives. The AC coordinates the Institute's collective bargaining strategy and is responsible for Professional Employees/Senior Management Consultation. One member of the AC is elected to the Board of Directors.

One of the topics recently discussed at the AC, was psychological health in the work place. This is very timely for us as we move towards collective bargaining. We will work to include psychological health, support and treatment in the next collective agreement. Information was presented to us from the Federal Public Service Centre of Expertise for Mental Health. Included in your package Appendix B is a hyperlink to their website as well as some other related websites for those of you who are interested.

We will be heading to the bargaining table starting June 10,2019. The negotiator that Ottawa has assigned us is Cara Ryan. We have consulted with the membership on issues related to bargaining through a survey.

Whitehorse hosted the Regional Council executive meeting on the 28th of November. The regional council executive participated in a meet and greet with the YHC Group member at Whitehorse General Hospital early on the morning of the 28th. 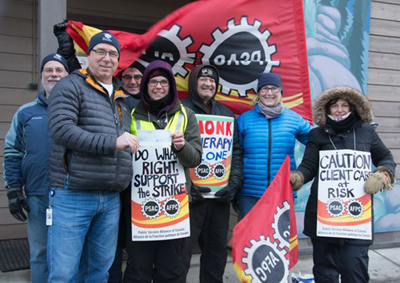 Local Yukon Employee Union (YEU) members were on strike at Many Rivers counselling service. On a very windy, cold street in Whitehorse, in support of our sister union, PIPSC presented a $1000.00 cheque for the YEU strike fund. The strike was settled after 3 months of strike action by these dedicated union members. Shortly thereafter the counselling service was closed, and all the members were laid off. Shameful example of union busting.

A lunch time meet and greet was held at a local restaurant with the federal members. 10 members of the Branch attended.

As I write this, I am making plans to visit Dawson city as YHC Group President. The YHC Group has a large geographical footprint and its members are spread throughout the 3 hospitals of the Yukon. One in Whitehorse, Dawson and Watson Lake.  To this point in time there has never been a physical visit, specifically for union business to the communities. My hope is to be able to meet face to face with the members to discuss their issues on their home turf. Also plan to meet with the Director of Patient Care in Dawson while in the community.

I plan to visit Watson Lake later this year.

Since March of 2019 I have been a member of a Task Force looking at the Board of Directors initiative called Professionals Canada. We are working through issues that have arisen out of the 2018 PIPSC AGM. The plan is to produce a report for the AC meeting in August.