To all proud CS Group Members,

Your Bargaining Team met with the employer for the first session of bargaining from February 26 to 28. Our CS Group President, Stan Buday, gave the opening remarks taking a strong stance that this round was aimed at getting recognition for CS members. “CS Members must be given the same respect as others who do their work whether they be in the federal public service, private sector, or contractors.”

Unlike previous rounds of negotiations, the Group’s pay proposal was presented on the first day of bargaining. This approach was motivated by your strong message to quickly address the issue of a fair wage increase.

We are all aware of the difficulty the Departments have in hiring CS workers and their bent toward spending more on contracting out. A document describing our pay proposal is being developed and will be released to you shortly.

The list of issues discussed in this first session includes: Hours of Work, Information, Stewards, Strikes, CSSDA, Overtime, Call Back, Leave on Termination, and Reclassification and Statement of Duties. Both sides agreed on a number of simple administrative changes.

Thank you to all who submitted photos, showed your colours and sent their encouragement to the Bargaining Team. Special thanks to the National & Regional Organizing Committees for their continued support and organization of events. All of this engagement greatly sustains us in our quest for a fair and equitable contract.

I urge you to contact your local Sub-Group or your Regional Organizing Committee member and visit the Do Better Campaign Website to get involved in future activities. 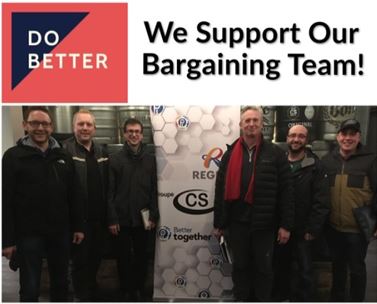 The next bargaining session with the employer will take place April 16-18, 2019.