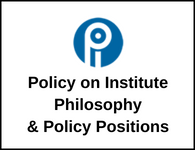 The Institute endorses, in principle, the following general position on Alternative Service Delivery (ASD) initiatives which will form the heart of all lobbying efforts, both public and private, that relate to the creation of ASD agencies:

The Institute endorses, in principle, the following communications and lobbying activities for any specific ASD agency:

The following actions are recommended as means of gaining support for the Institute's position with relation to the staffing and operation of ASD agencies being established by the government, these actions to be considered as urgent in view of the government's declared intention to continue with the creation of new ASD agencies at a rapid rate:

The Institute adopts the following Statutory Requirements for Certification:

The following items will be treated in the same manner as the NJC (National Joint Council) items listed in Institute collective agreements:

In order to determine from whom the Institute would seek redress - the Treasury Board which is the party to the Work Force Adjustment Directive (WFAD) or the new employer which makes offers of employment to members - the Institute will:

Following is the Institute's positions on the impact of Group mergers and Universal Classification Standard (UCS) bargaining in ASD initiatives:

Part B - Retirement And Pension Benefits

If plans have an actuarial surplus, the surplus should be used solely for the benefit of plan members.

The Institute stands for collective bargaining without political interference and will oppose any efforts to restrict this freedom.

The Institute deplores the continued erosion of the professional status of its members in the public service and urges governments to allocate sufficient funds to support professional development and provide for a significant increase in attendance at conferences and seminars.

6. Self-identification in the Federal Public Service

The Institute position on any process used to establish a new legislative regime governing employer/employee relations in the public service is that the process must be undertaken by a neutral body which has the confidence of both parties - the bargaining agent and the employer.

The Professional Institute supports the concept of time off for negotiations and encourages Groups to negotiate time off with pay for the purpose of contract negotiations.

The Institute is opposed to the concept of regional pay rates. This position shall stand until amended by a resolution from the membership.

The Professional Institute will lobby governments employing Institute members to pass whistle-blowing legislation that will permit them to exercise their rights to communicate with elected representatives and to question actions of their employers without fear of censure and without fear of discipline or dismissal.

The Professional Institute will seek the commitment of the federal government and the Treasury Board to ensure the application of workforce adjustment policies in a fair and equitable manner by recognizing the varying degrees of marketability and portability of skills in the type of work performed by federal government employees and ensuring that retraining resources are allocated on a prioritized basis so as to create a level playing field for all its employees in terms of redeployment and that, in this regard, the following criteria may be taken into consideration:

that PIPSC informs all departments and agencies that the Institute will not participate in RTW consultation committees at any level,

that PIPSC issue a formal directive to all its Stewards not to participate to these committees at any level,

that PIPSC publicize its decision to members an inform them of their right to representation through the implication of an ERO and that not participating in these committees and/or not signing proposed consent forms in no way jeopardises their right to RTW and accommodation.

Notwithstanding the above, Stewards may participate on RTW Committees where approved on a case by case basis by the Institute.