Observed annually on April 28th, the National Day of Mourning commemorates workers who have been injured, killed or suffer illness as a result of occupational accidents and hazards.

This day of observance was originally declared by the Canadian Labour Congress in 1984, and became a national observance in December 1990 upon the passing into legislation of the Workers Mourning Day Act. The date April 28th was picked because on that day in 1914, the Workers Compensation Act received its third reading.

Members are encouraged to organize and participate in events in their community on this day to express remembrance for family, friends and colleagues who have suffered in carrying out workplace duties.

Any Institute meetings or events scheduled to take place on this day will be opened by observing a moment of silence.

Approved by the Board of Directors
September 2008 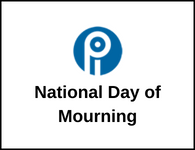