The Institute recognizes that disputes between members and matters which could require corrective measures, including discipline, may arise from time to time. This policy shall apply to: 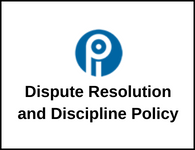 The Institute will promote the resolution of disputes through dialogue, cooperation, respect and understanding. The parties to such disputes will be encouraged to resolve their differences through informal means. The Institute will consider all requests for assistance in resolving disputes and conflicts between members. This includes, but is not limited to informal intervention, coaching, mediation, facilitated discussion and other.

Members are strongly encouraged to attempt to resolve differences through collaborative, cooperative means instead of using adversary methods of filing formal complaints. No formal allegation of misconduct need be filed in order for members to seek assistance with conflict resolution.

Where appropriate, a formal investigation process may be put on hold to allow the parties to seek an informal resolution to their dispute.

A Member Conduct Roster (“Roster”) consisting of twelve (12) members shall be established by the Board of Directors on a triennial basis. The Board of Directors, in establishing the Roster, shall consider primarily the skills and competencies of the candidates, and, where possible, attempt to find some balance across regions and groups.

Any Regular or Retired member is eligible to form part of the Roster, so long as they do not concurrently hold office as a member of the Board of Directors, or a President or Vice-President of a constituent body.

Submissions of interest shall be communicated to the Office of the General Counsel, who shall propose qualified candidates to the Board of Directors.

The Roster shall be used to establish designated Panels of Peers, consisting of three (3) members, as required, to determine appropriate corrective measures. The General Counsel shall be responsible for designating each Panel, in such a manner as to ensure an unbiased consideration of each case.

The Panel of Peers shall make decisions that are not arbitrary, discriminatory or in bad faith.

In all other cases, the General Counsel shall determine, in consultation with the President: a) the most appropriate course of action given all the circumstances; and b) the composition of the designated Panel of Peers, where required.

In any case, the designated Panel of Peers may determine that corrective measures, short of suspension and expulsion from office(s) or membership, should apply.

No member shall be suspended or expulsed from office or membership unless an investigation has been conducted.

The General Counsel shall provide the investigator’s final report, along with any written submissions of the parties, to the Panel of Peers for consideration.

Within fourteen (14) days of receipt of any decision of the designated Panel of Peers imposing suspension or expulsion from office or membership, the disciplined member(s) may appeal by written submission to the Chief Operating Officer and Executive Secretary. Such submissions shall be limited to no more than five (5) pages double-spaced.

Upon receipt of appeal submissions, the Chief Operating Officer and Executive Secretary shall mandate a third-party neutral to dispose of the appeal as expeditiously as possible. The third-party shall be selected from a standing list of neutrals established and administered by the Office of the COO. The Institute will bear the costs of retaining the third-party neutral.

The third-party neutral will establish the process to be followed in each case, while ensuring procedural fairness and a review of the facts and all arguments made by the parties. For example, the third-party neutral may elect to determine the appeal on the basis of written submissions, hear arguments or testimony via tele/video-conference, or hear viva voce testimony.

The Institute will not be responsible for costs incurred by a member in relation to such appeal.

In cases where the Panel of Peers determines that suspension or expulsion from office or membership is an appropriate corrective measure to be imposed upon a member of the Board of Directors, except for the President and Vice-Presidents who are governed by Part G of this Policy, such decision shall be subject to appeal pursuant to Part E.

If no appeal is sought, the General Counsel shall inform the Board of Directors of the decision of the Panel of Peers. The Board of Directors shall, at its next regular meeting, resolve to call a Special General Meeting for the purpose of considering the proposed suspension or expulsion from office or membership.

Suspension or expulsion from office or membership of a member of the Board of Directors may only occur by ordinary resolution at a Special General Meeting.

Removal as a member of the Board of Directors may only occur by ordinary resolution at a Special General Meeting.