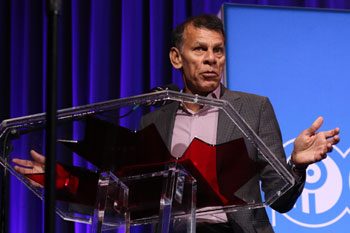 Although he acknowledged that many Canadians take the public service for granted, he greatly appreciates the equality of service that PIPSC members provide – they provide the same excellent level of service to all Canadians.

He thanked PIPSC members for the world-class public service they provide.

Mr. Yussuff commended the hard work and persistence of unions that put an end to Bill C-37. Unions will continue to be vigilant in protecting the rights of workers.

Hassan expressed hope that the minority government results from the recent federal may offer opportunities for unions to make progress on the issues that matter most. One of those issues is that fact that 3.5 million Canadians can’t afford the medication they need. That’s why the CLC appreciates that PIPSC has added its voice to the call for a universal prescription drug plan for all Canadians.

Determined to build a better world for future generations, the CLC is also committed to the fight against climate change and to ensuring a just and fair transition for the workers and communities affected by the evolution to a green economy.

Hassan addressed the fundamental changes in the nature of work in the country.  Our current organizing model is not working for the current labour situation. That is why Hassan applauds the Institute’s Professionals Canada initiative.

He also praised the Institute’s hard work at the bargaining table that led to time off for victims of domestic violence.  Pay equity is another issue the CLC wants to make progress on.

Working together, unions have made progress but there is much work to be done, and PIPSC is an essential partner with the CLC.