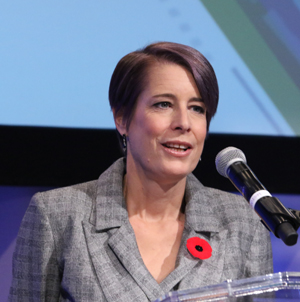 While the relationship with our members is most important, the President explained that building and maintaining relationships with government decision-makers, unions, media, NGOs, and others is crucial to the Institute’s success.

The Institute has made great progress on science. The Trudeau government committed to adopt departmental scientific integrity policies based on the Institute’s own model policy by the end of this year. This is a tremendous victory for our members and Canadians.

Surveys matter. They are fundamental to ensuring the Institute approaches our dealings with facts and evidence direct from our members. They validate our concerns. They amplify our voice. They start a conversation.

The release of Defrosting Science this February, our survey report on the progress made unmuzzling federal scientists, received widespread media attention. It also shed light on work the government still needs to do. Yes, far fewer federal scientists feel “muzzled” now than in 2013. But when over half (53%) still say they feel unable to speak freely, we know more needs to be done to educate members and managers about their rights and obligations.

Our recent report on Women in Science also confirmed some longstanding barriers that continue to beset many, especially younger, female scientists, who are twice as likely as older scientists to perceive gender bias in the hiring process. Those barriers too demand change.

On tax fairness, this year was the turn of our 12,000 tax professionals at the Canada Revenue Agency to get the spotlight. While the Trudeau government has re-invested significant amounts of money in the CRA, there remains a $500-million gap in funding compared to 2012. That’s when the Harper government heavily cut funding and staff.

And it’s made defending tax fairness difficult for our members. As Shell Game, our most recent survey report, showed, off-shore tax havens, loopholes and federal cost-cutting have combined to make tax fairness harder than ever to maintain. Eight out of 10 Canadians and 9 out of 10 of our members agree: “it is easier for corporations and wealthy individuals to evade or avoid tax responsibilities than it is for average Canadians.”

Defending tax fairness therefore must be a priority of ours and of the government.

That report also received extensive media coverage and is the basis of our call for more funding in next year’s budget, specifically to improve training and technology for our members.

Partnerships with government matter too

The government’s decision this spring to spend $16 million on finding a Phoenix replacement would never have happened were it not for the Institute’s call for a replacement and lobbying efforts.

Nor would more recent steps to modernize and expedite procurement of a new system have been taken without direct talks between President Daviau and Treasury Board President Scott Brison.

As a result, PIPSC is now a partner with government in deciding on a replacement for Phoenix. And the government has indicated that the testing of possible replacements will begin soon, and a replacement chosen by the spring of next year.

The last round of federal bargaining demonstrated how important good relationships are to successful outcomes. PIPSC won recognition of the right of scientists to speak freely and adoption of scientific integrity policies, and also secured strong language to help fight outsourcing. We protected sick leave. And our protests restored bargaining rights that the Harper government removed.

Along with other unions, this year we also won better birth control coverage and a long-awaited electronic claims system as part of the federal Public Service Health Care Plan

Progress has been made this year is in setting new ground rules for the upcoming round of federal bargaining. The new protocols agreed to with the government should help expedite and focus negotiations on our demands and ensure better bargaining on both sides.

As the Institute’s achievements of the past year demonstrate, long-term planning and relationships matter. So does the courage to stick with those plans despite occasional obstacles and setbacks.

As successful as we’ve been, we cannot rest on past victories. Old and new challenges arise. Longstanding relationships must be maintained and new ones nurtured.

One of the greatest challenges confronting PIPSC today is retaining our members’ gains in the face of losses suffered by professionals elsewhere in the economy. And not just retaining those gains, but building on them, despite efforts to undermine hard-won rights in other areas.

The Harper government’s assaults on union bargaining rights, on union dues, and on unions themselves may have been fended off – for now.

But they should never be seen as isolated threats or distant memories.

As the Trump administration in the U.S. and the Ford government in Ontario remind us, we are always one election away from another attack on public servants, labour laws, and unions.

These attacks will come to us again in time. We need to prepare now to respond from a position of strength – Strength in numbers.

The Institute also needs to confront some harsh realities – such as the federal government’s failure to rein in its over-reliance on outsourcing.

Overall spending on outsourcing has increased from $10 billion, when the Liberals were elected, to $12 billion today.

This is a very dangerous trend for a union such as PIPSC to ignore.

The temptation of employers – public and private – to point to lower-paid, pension-less workers with too few benefits as the norm is simply too great.

That should not be the Institute’s 100th anniversary legacy.

The theme of this year’s AGM is “crossroads” – delegates will decide what path to take.

Whatever the decision, one thing is certain: We need to strengthen our union for the future.

The Institute needs to bolster old relationships and nurture new ones.

Full Text of the President’s address.