The Opening of the 99th AGM of the Professional Institute

At 8:30 a.m. sharp on Friday, November 2, 2018, AGM Co-Chairs Marilyn Best and Richard East called the 99th Annual General Meeting to order with a warm welcome to the 458 delegates. 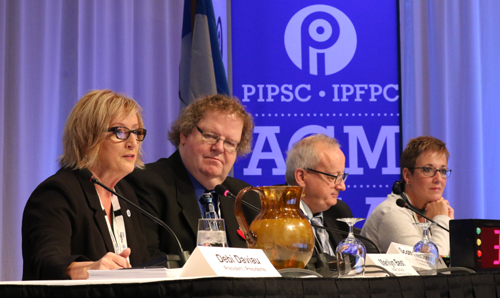 The assembly observed a moment of silence to honour members who had passed away since the previous AGM. Pursuant to a resolution at the 2014 AGM, delegates proudly stood at attention for the Canadian National Anthem.

As delegates prepared for business, the Chairs reviewed the rules of procedure and conduct, and led the delegates through the initial items on the agenda, including the disposition of the 2017 AGM resolutions.

Members not attending the Annual General Meeting are able to view, on the PIPSC web site, live broadcasts of key AGM events such as President Debi Daviau’s address to the delegates and the keynote address by Steve Kriesberg, Director of Research and Bargaining for A.F.S.M.E. – the American Federation of State, County and Municipal Employees.

These AGM high points will also be recorded and available on the pipsc.ca site for later viewing by members. Links to these broadcasts will be available on our Home page at www.pipsc.ca under News or on the AGM page at http://www.pipsc.ca/about/governance/agm/2018.