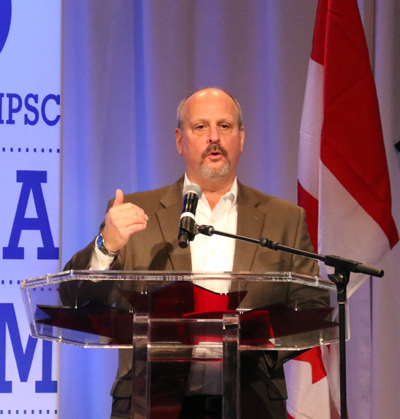 Steve is the Director of Research and Collective Bargaining Services with A.F.S.C.M.E. – the American Federation of State, County and Municipal Employees.

With over 1.3 million members, A.F.S.C.M.E. is the largest union of public employees in the United States.

It is also a TARGET of incessant attacks from anti-labour politicians.

The “Janus” case which challenged the American equivalent of the Rand formula – the power to collect fees from non-union members – was launched against A.F.S.C.M.E.

Earlier this year, the U.S. Supreme Court – dominated by Republican judges – ruled against unions’ right to charge fees for services that benefit non-members – effectively undermining the financial stability of the labour movement and its long-term sustainability in the U.S.

A.F.S.C.M.E.’s experience and its strategy for dealing with the attacks from the right are both timely and instructive for OUR union.

Steve shared some lessons that our fellow public sector unions in the south have learned in preparing for challenges to their sustainability.

Steve shared his experience of successfully defending his union against attacks on their funding model.

These lessons learned are especially relevant to PIPSC members as attacks on the Rand funding formula for Canadian unions are a real threat to our sustainability.

In the United States, the “Janus” court decision struck a blow to union finances and ability to organize.

Years ago, A.F.S.C.M.E  began to prepare in anticipation of this attack and have managed to lose only 8% of their members in the immediate aftermath of the court case, as opposed to the 30% that was initially projected.

These are some of the lessons Steve shared:

"Never underestimate the motivation of the forces that are fighting our unions. In the U.S., they used their majority on the Supreme Court to undermine our financial stability and now they're contacting our members one by one to convince them to leave their union."

"Member mobilization was our best strategy in fending off the attacks from the right. We went from a model of campaigning once in a while, to a state of permanent mobilization."

"Through one-on-one conversations, members have a clearer idea of what the union does, the value it adds, the way it matters in their lives. It means they can sniff out the lies and dirty tricks from the other side, because they’ve heard the truth from us."