Welcome to summer in the Atlantic region.

Thank you to Sue Harris and Barry Gerus for their work on the Regional Executive over the past two years. Volunteering your time and supporting the region’s work is greatly appreciated. Welcome to Marilyn Best and Marcel Journeay, who were elected to the Executive at the 74th Regional Council in Prince Edward Island.

Some of our groups have reached and/or ratified tentative agreements. We still have groups in negotiations, so if called on for support from any groups still negotiating please provide your support. Any changes to the sick leave provisions in the federal collective agreements have been put aside for this round and a working group of managers and union representatives is being set up to discuss the needs and wants of both sides. Sick leave will be brought back to the negotiation tables in the next round and all members will be given the opportunity to vote on it. 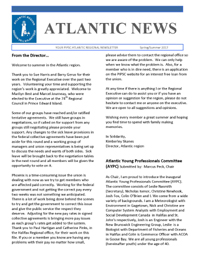 Phoenix is a time-consuming issue the union is dealing with now as we try to get members who are affected paid correctly. Working for the federal government and not getting the correct pay every two weeks was not something we anticipated. There is a lot of work being done behind the scenes to try and get the government to correct this issue and give the public service the respect they deserve. Adjusting for the new pay rates in signed collective agreements is bringing more pay issues as each group’s rates get added to the system. Thank you to Paul Hartigan and Catherine Pinks, in the Halifax Regional office, for their work on this file. If you or a member you know are having any problems with their pay no matter how small, please advise them to contact the regional office so we are aware of the problem. We can only help when we know what the problem is. Also, for a member who is in dire need, there is an application on the PIPSC website for an interest free loan from the union.

Wishing every member a great summer and hoping you find time to spend with family making memories.

As Chair, I am proud to introduce the inaugural Atlantic Young Professionals Committee (AYPC). The committee consists of Leslie Nasmith (Secretary), Nicholas Isenor, Christine Newhook, Josh Fox, Colin O’Brien and I. We come from a wide variety of backgrounds. I am a Meteorologist with Environment in Gagetown, Nick and Christine are Computer System Analysts with Employment and Social Development Canada in Halifax and St. John’s respectively, Josh is an Engineer with the New Brunswick Engineering Group, Leslie is a Biologist with Department of Fisheries and Oceans in Halifax and Colin is Commerce Officer with ACOA in Goose Bay. We are all young professionals (hereinafter youth) under the age of 40. 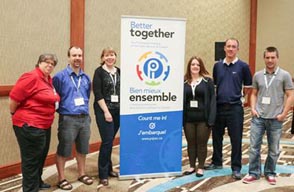 Thank you to the Atlantic Regional Executive for their hard work in creating this committee and especially Regional Director, Kim Skanes, for working hard at the Board to secure our place.

We had our first meeting at the 74th Atlantic Regional Council (ARC) in May. There, from the relatively blank slate given to us, we created our goals and objectives moving forward. Some of our goals include; discussing ways to better engage youth in the union and representing youth issues in the workplace.

Our immediate goals were to create a way for other youth to connect with us. This included an email (aypc_cjpa@pipsc.ca) and a Twitter account. (@AYPC_CJPA) We also decided to create a large network of “Friends of the Committee” so that other youth can; follow our work, hold us accountable and bring forward their ideas. We canvassed youth at the ARC and found six new friends of the Committee.

In the near future we plan to send out a survey to gauge demographics of our youth contingent in the Atlantic Region and find out what issues are important to them. Finally, we are in the process of deciding on a logo. While we do have something in mind (similar to the Atlantic Region’s logo) we invite anyone with suggestions or who would like to try designing one to send an email to the address listed above.

The Committee will be meeting at; Stewards Council, the national AGM (tentative) and the ARC. Any youth (or those who are not youth but are interested in youth issues) are welcome to approach any of us at those times. Additionally, feel free to contact us via email or twitter.

The St. John’s SH Sub Group hosted a lunch and learn on International Women’s Day with the key theme #EqualityMatters. Our event opened with the executive providing key facts on gender equality in today’s world. Did you know when compared to males: Women are at a 20% higher risk of violent victimization; women’s average earnings in all job tenures showed a 30% wage gap; Women spend more time caring for children (50.1 hr/wk vs 24.4 for men) and seniors (49% vs 25%) and women make up only 28% of municipal counsellors and only 18% of mayors. Why does Equality matter? Violence against women costs $9.3 billion /yr; father involvement in childcare improves health of children; women in politics raise issues that are traditionally overlooked; and more gender equal countries have higher quality of life and lower chance of depression, divorce, or becoming a victim of violence (information retrieved from the Status of Women Canada). 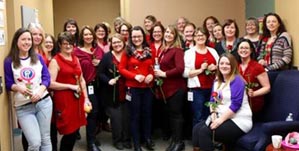 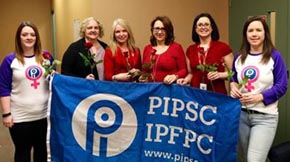 We have rolled this information up to our Atlantic Executive. We finished off our event with prizes, a rose, and a group picture, which included our Red attire and CS Stewards. Post event reviews were very positive with several members enticed to become more involved and requested access to similar events in the near future.

At the Atlantic Regional Training School, held April 27-29 at White Point Beach Resort, the Regional Executive sold tickets on a FitBit to raise funds for a local charity. Funds raised at the School were donated to the Liverpool Firefighters Association. There are approximately 6500 people in the Liverpool Firefighters Association fire district. They have 41 volunteers and operate with a fleet of 7 vehicles. 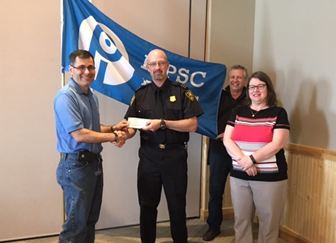 The Delta Prince Edward in Charlottetown, PE was the location for the 74th Atlantic Regional Council (ARC) Meeting, May 26-27, 2017. Eighty six delegates from Branches and Provincial Groups across the Atlantic Region gathered for a day and half of networking, education and business.

Friday‘s agenda saw delegates participating in an entertaining and educational session entitled “Resolution Workout.” Following a presentation on writing and presenting resolutions, delegates in groups were provided with a topic where they drafted and presented the resolution. To keep the exercise realistic and interesting, there were amendments and challenges from the floor with rulings from the mock Chairperson. Friday night delegates and guests participated in an evening of networking, bowling and refreshments at The Alley. 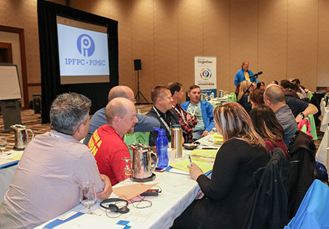 Delegates at the 74th Atlantic Regional Council participating in the Resolution Workout!

Saturday the Delegates got down to the business of the 74th ARC. Mid morning President Daviau briefed the delegates on Institute activities and entertained questions from the floor. In the afternoon, NCR Director, Greg Scriver gave an informative presentation entitled Stop Bill C-27.

Donation to The Upper Room 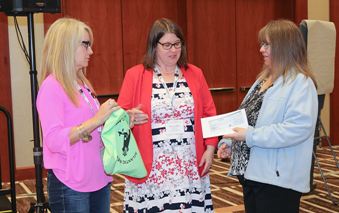 At the 74th Atlantic Regional Council, held in June in Charlottetown, PE, the Regional Executive sold tickets on wireless headphones and raised funds to donate to The Upper Room.

The Upper Room Hospitality Ministry was established in 1984, when the soup kitchen first opened its doors. In 1986, the Food Bank was opened to distribute food to needy families. Both facilities are run by volunteers and paid staff, and rely exclusively on donations of food and funds. The Upper Room Hospitality Ministry is a non-profit, non-denominational organization.

2017 Executive of the Year Award

The 2017 Executive of the Year Award was presented to Carolyn Hynes a member of the Executives of the SH Sub Group, St. John’s Branch, Atlantic Regional Executive and Training Committee.

Carolyn’s active participation on these constituent body executives and service to the members earned her recognition as receipient of this award. 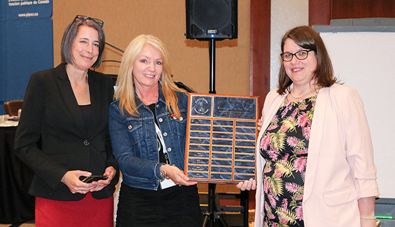