Contracting out of IT work at National Defence

The PIPSC Computer Systems (CS) Group is working hard to enforce Article 30 of its collective agreement. This article stipulates that the employer must make a reasonable effort to use existing employees or hire new full-time or term employees as needed before contracting out work to private companies or consultants. Hiring consultants to complete government IT work has a high cost and contributes to the erosion of institutional memory. Unfortunately, despite the new collective agreement language, contracting out of important government work is still ongoing at almost all departments in flagrant disregard of Article 30. One of the most problematic departments is the Department of National Defence (DND). This report analyzes the policy grievances submitted against DND between January 2018 and March 2020 for outsourcing of government work that could have been done internally. The data demonstrates how this department is not following Article 30 of the CS Group collective agreement.

The CS Group only received 88 responses out of the 174 inquiries. A total of 151 grievances were subsequently filed for contracts published during the studied timeframe. From the responses that were received, National Defence stated the following reasons to contract out:

The lack of in-house skill set was the most frequent reason cited by DND for contracting out. It is PIPSC’s position that it is the responsibility of DND to ensure that proper, timely training is received by the CS members in order to meet not only the present requirements, but any future technological demands required to support public services. Investing in employees is a cost-effective way of ensuring institutional knowledge and skills are maintained and the department is able to keep up with the ever-changing demands of technology. The amount of funding available to ensure proper training is delivered is a direct responsibility of DND when developing annual budgets.

High cost of contracted out work

Of the tenders and contracts examined:

The value of the remaining contracts that we were able to find amongst these tenders totalled over $414 million.

1316 contractors were being recruited in tenders analyzed during the studied timeframe, or 1316 personnel resources. This high number shines a light on DND's shortage of necessary IT staff to carry out requirements. The types of IT work most sought after by DND during this period were architecture, analysts, and security. Other CS job types frequently contracted out were project managers, programmers, help desk and network support.

From November 2017 until March 2020, the amount and types of advertising to fill regular or term staff positions within DND were examined on the Government of Canada job site.

The following charts give us a clear picture of how DND did not attempt to staff jobs with permanent or term employees, preferring to contract out for specific skill sets. For example, DNDcontracted out over 500 resources in network architecture work, while seeking permanent or term employees for that job type in only two job advertisements. PIPSC sees the volume of contracted resources that are constantly working for the department as too high. There were 1316 contractors recruited during this period while DND sought only 60 permanent and term public servants. It is clear that DND is not trying to hire employees, nor making reasonable efforts to hire permanent or term employees to complete required IT work in the department. 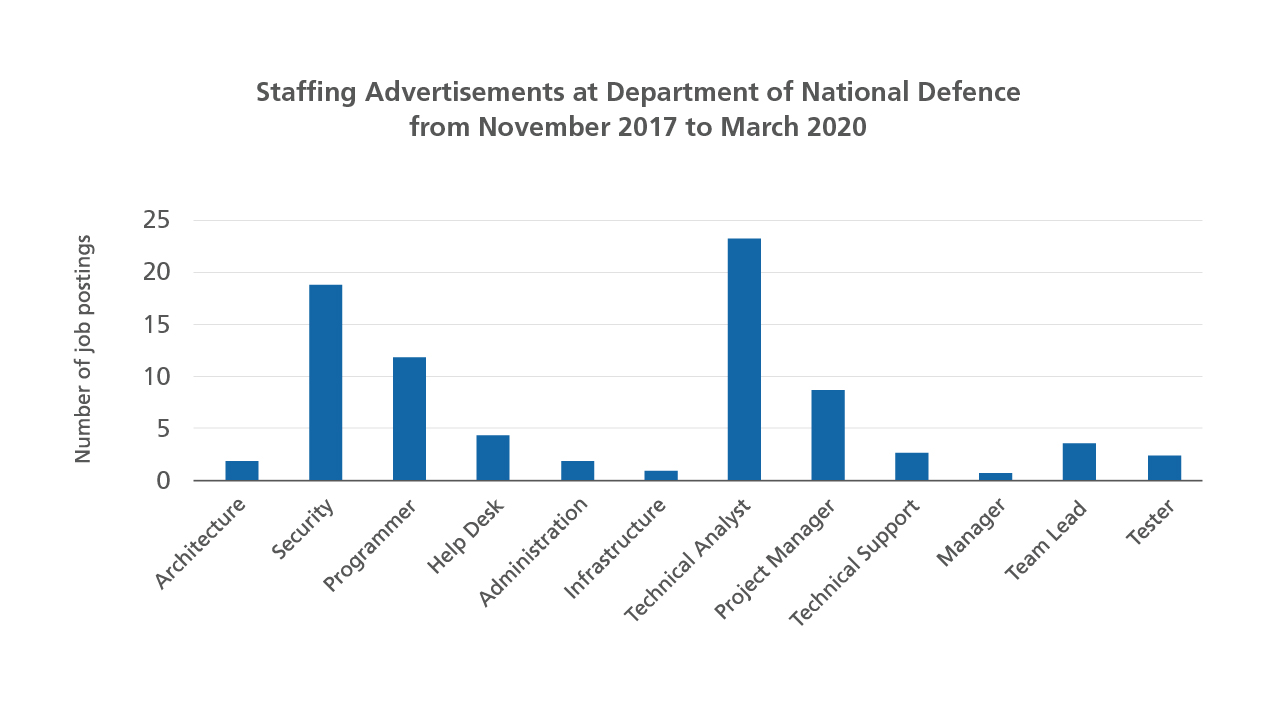 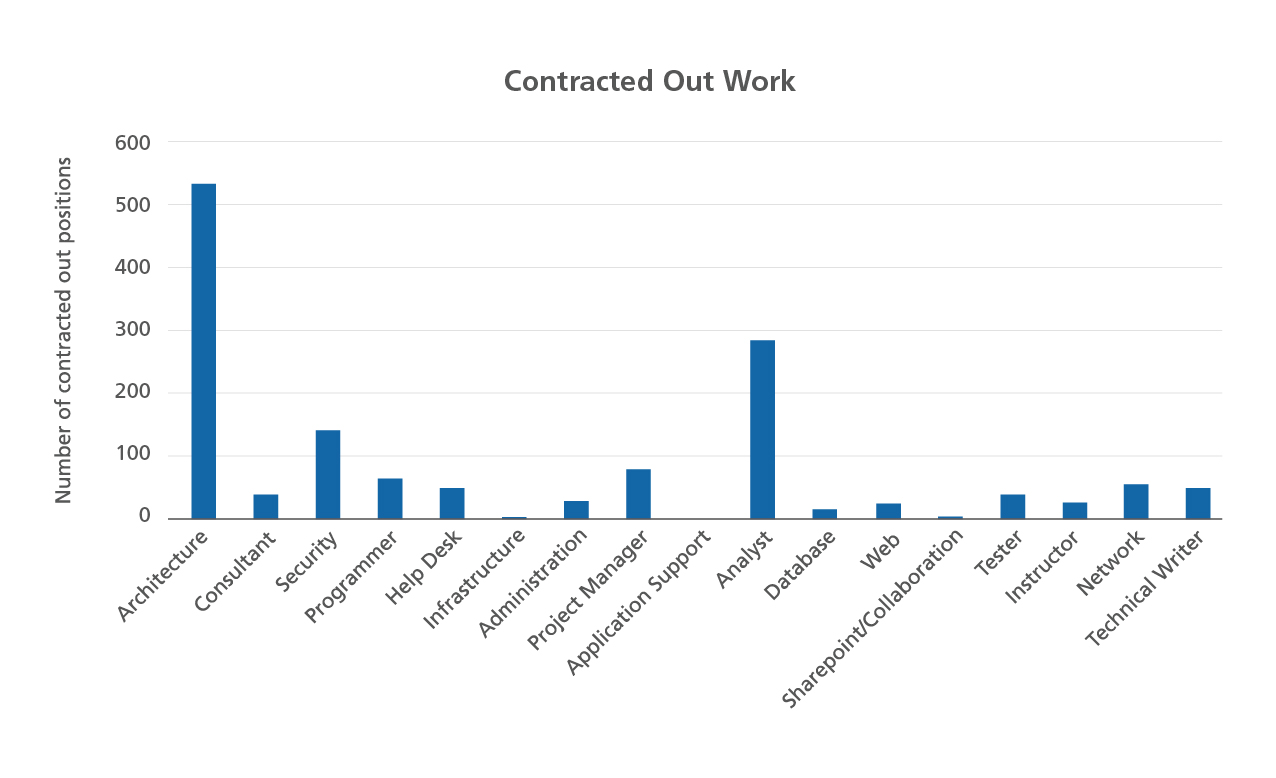 PIPSC has seen an increase in responses from the Department of National Defence (DND) in the last year, although the responses continue to describe little or no reasonable effort to hire permanent or term employees before contracting out as required by the CS Group Collective Agreement. The sheer amount of grievances filed against DND is very high and causes unnecessary work for both PIPSC and the Treasury Board of Canada Secretariat (TBS).

The data is showing us that DND is a department that prefers to contract out IT work at extremely high costs on a continual basis. The length of time that the contracts lasted and the sheer number of contractors in positions completing work that is recognized as recurrent and permanent is staggering. The data shows a high amount of security work being contracted out. Work involving the security of IT systems and the data that they house should be carried out by public service professionals. The work is not temporary in nature and it is of high importance. If there were to be a security breach, public service professionals could be held responsible for the breach, rather than an external contractor who cannot be held accountable.

Although this report does not look at training, PIPSC sees DND as a department that should be training their employees in order to meet the future demands of the government. This may help to reduce its reliance on contracting out.

The result of this internal report solidifies why DND is the second worst department within the Government of Canada with regards to adherence to Article 30 of the Computer Systems Group Collective Agreement. PIPSC is dedicated to bringing these matters to light and using the means necessary to ensure that the collective agreement is adhered to by all departments and agencies.