Contracting out of IT work at Immigration, Refugees and Citizenship Canada

The PIPSC Computer Systems (CS) Group is working hard to enforce Article 30 of their collective agreement. This article stipulates that the employer must make a reasonable effort to use existing employees or hire new full-time or term employees as needed before contracting out work to private companies or consultants. Hiring consultants to complete government IT work has a high cost and contributes to the erosion of institutional memory. Unfortunately, despite the new collective agreement language, contracting out of important government work is still ongoing at almost all departments in flagrant disregard to Article 30.

The most problematic department of the federal public service with regards to contracting out is Immigration, Refugees and Citizenship Canada (IRCC). This report analyzes the policy grievances submitted against IRCC between January 2018 and March 2020 for outsourcing of government work that could have been done internally. The data demonstrates how this department is not following the collective agreement.

The CS Group analyzed a total of 276 tenders or contracts. The group inquired by email about 268 of these tenders or contracts, asking the department to describe the reasonable effort that was carried out to respect the outsourcing provisions of the collective agreement. The insufficient responses received from IRCC led the group to file 247 policy grievances against the department. This is the highest number of grievances for any one department that our Contracting Out Action Team has had to file

The CS Group received only 169 responses out of the 268 inquiries, including many insufficient responses. This led the group to file a total of 247 grievances for contracting out during the studied timeframe. From the responses that were received, IRCC stated the following reasons to contract out:

The lack of in-house skill set was the most frequent reason for contracting out. It is PIPSC’s position that it is the department’s responsibility to ensure that proper, timely training is received by the CS members in order to meet not only present requirements, but also any future technological demands required to support public services. Investing in employees is a cost-effective way of ensuring institutional knowledge and skills are maintained and the department is able to keep up with the ever-changing demands of technology. The amount of funding available to ensure proper training is delivered is a direct responsibility of the department when developing annual budgets.

Of the tenders and contracts examined, 9 were described as tier 1 contracts, meaning the cost could be anywhere up to $3.75 million each. The value of the remaining contracts that we were able to find among these tenders totaled over $115 million.

Although 39% of the contracts were for a 1-year period, 18% of contracts had renewal clauses that could renew the contract 1 to 3 times, each for additional 1-year terms.

Approximately 270 contractors were sought out in these tenders during this timeframe, or 270 personnel resources. It's evident that this high number shines a light on IRCC’s shortage of necessary IT staff to carry out public service work. The types of work most sought after by this department during this period were IT architects, analysts and programmers. Other types of CS work highly contracted out were project managers, security, consultants, help desk and network support.

From November 2017 until March 2020, the amount and types of advertising to fill positions within IRCC were examined on the Government of Canada job site.

During this timeframe, the department advertised 25 times seeking approximately 85 personnel mainly for Team Leaders, Project Managers and Analysts. 85% of these advertisements were for the CS-03 levels.

Only 14 of the advertisements were advertised to the public, of which 10 of those were at the CS-01 level. Most CS-01 public advertisements were for casual employment (non-unionized employment at the department for 90 days maximum per year).  It is clear that the department does not see staffing with regular permanent or term positions as a way to reduce the number of contracted resources, which would ensure that public service professionals are carrying out the ongoing and recurring work required by IRCC.

The following charts give us a clear picture that IRCC did not attempt to staff jobs with permanent or term employees. It preferred to contract out for specific skill sets in violation of Article 30. For example, during the studied timeframe, IRCCcontracted out approximately 56 programmer resources, while seeking regular permanent or term employees through only two advertisements for the same type of work at the CS-01 level. PIPSC sees the volume of contracted resources that are constantly working for the department as too high. There were 270 contractors during this period, while IRCC sought out only 23 permanent public service professionals.

It is clear that Immigration, Refugees and Citizenship Canada is not trying to make reasonable efforts to hire permanent or term employees to complete required work in the department. 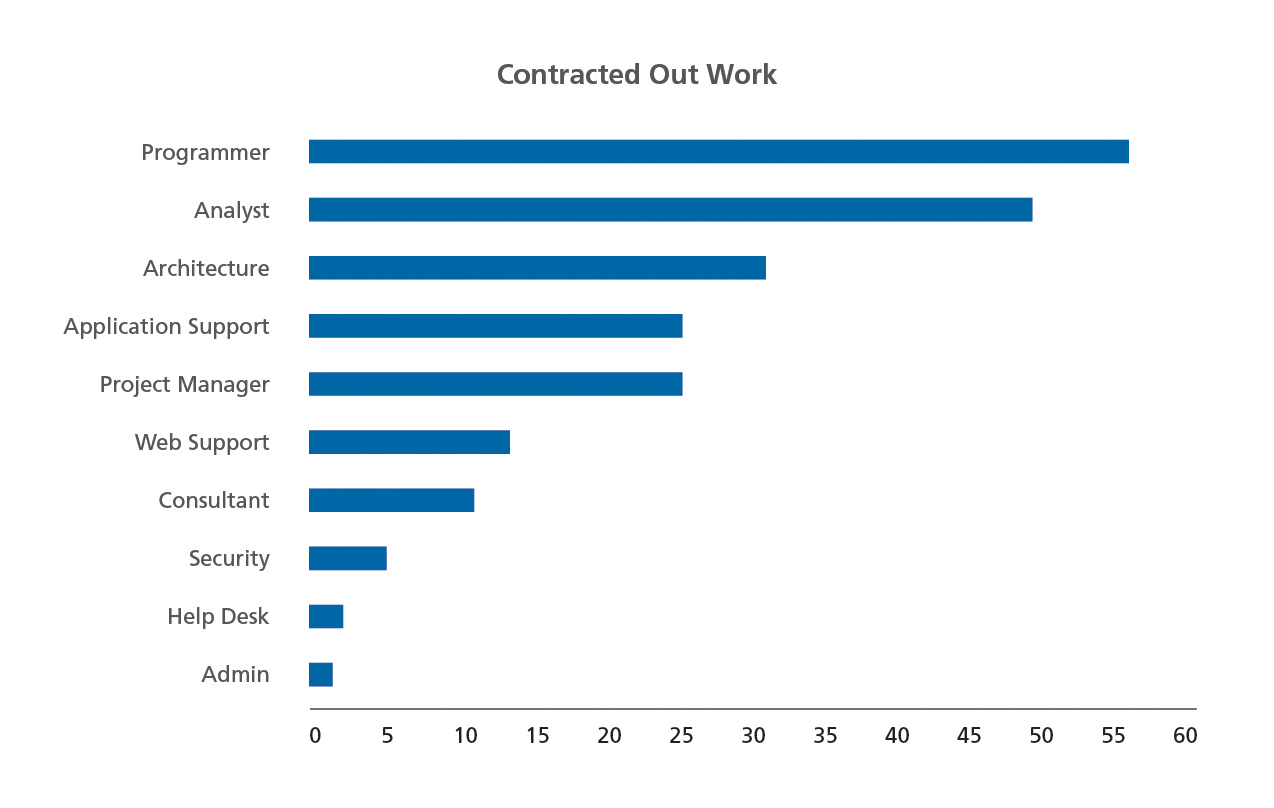 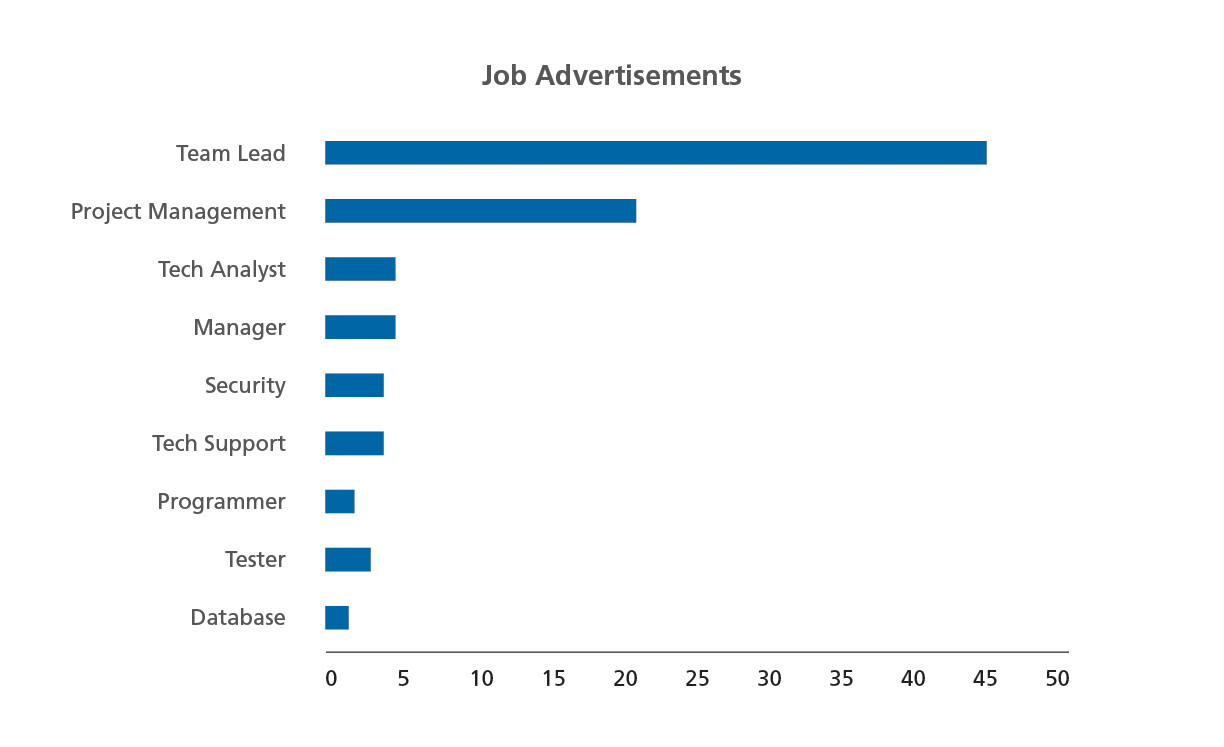 IRCC uses standing offers as a contracting out vehicle more than any other department. Standing offers are kept current through Public Services and Procurement Canada, and allow departments to go directly to a company for services while keeping within a specified dollar value for those services. This makes it very easy for departments to contract out work with less effort than going through a bidding process. It is evident that IRCC is making little or no reasonable effort to hire before contracting out as required by the CS collective agreement. The number of grievances filed against IRCC is very high and causes unnecessary work for both PIPSC and the Treasury Board of Canada Secretariat.

The data shows us that IRCC prefers to contract out IT work on a continuous basis, as observed on Canada’s Proactive Disclosure website. The length of time that contractors are completing work that is established as permanent, as well as the sheer number of contractors working at IRCC, is staggering. In particular, there is a high amount of application support work being contracted out. Application support is one area that should be carried out by public service professionals in order to ensure corporate knowledge is maintained within the public service. The work is not temporary in nature, and it is of high importance.

Although this report does not look at training, PIPSC sees IRCC as a department that should be training their employees in order to meet the future demands of the government. This may help to reduce its reliance on contracting out.

The result of this internal report solidifies why IRCC is the department within the Government of Canada with the highest number of grievances for Article 30 of the Computer Systems Group collective agreement. PIPSC is dedicated to bringing these matters to light and using the means necessary to ensure that the collective agreement is adhered to by all departments and agencies.