The branch has a total of 465 members; which has increased by 9% from 421. Our branch is comprised of members from 16 different employers and 12 bargaining groups. The largest employers in our branch are Environment and Climate Change Canada, Juravinski Cancer Centre, Department of Fisheries and Oceans, and the Canadian Food Inspection Agency. The bargaining groups with the most members in our branch are the Applied Science and Patent Examiners, the Juravinski Cancer Centre, Research Scientists, Computer Science, Engineering, Architecture and Land Survey. Members work at a number of different sites in Hamilton, Burlington, Brantford and surrounding areas. The majority of membership increase was attributed to new hiring at DFO (19), ECC (13) and Health (5). The highest number of new hires, based on their bargaining groups, were SP (21), RE (7), CS (6) and NR (5). Two figures have been included at the end of this report illustrating the breakdown of the Branch membership by employer and bargaining group in comparison to last year.

The Branch Executive held a total of four dinner meetings this past year. Meetings were held to plan Branch activities, select delegates for Regional and National meetings, and to discuss bargaining, labor management consultation, occupational health and safety and to look after the general business of the Branch.

In January 2019 Carrie Gerdes, Branch Secretary, went on maternity leave. Beau Atkinson stepped in as interim secretary until the AGM in April 2019.

The Branch organized a Branch-wide social at a local pub in Stoney Creek to allow members from our different worksites to meet, network and discuss common issues. The Executive evaluated guidelines to fund PIPSC worksite events in a fair and equitable manner, which was distributed to our membership in the spring of 2017. Two Lunch and Learn activities on “PIPSC and You” and ESWP were held at Canada Centre for Inland Waters. Three events were funded through this mechanism this past year: to provide refreshment during Mental Health Day, a morning coffee break for medical radiation technologists at the Juravinski Cancer Centre, and a holiday social at Canada Centre for Inland Waters.

The Branch will hold the Annual General Meeting on April 9th, 2019 at the Michael Angelo Banquet Hall in Hamilton. Based on attendance from previous years, we expect 50-60 members to attend the dinner meeting. The keynote speaker for the meeting will be Stephane Aubrey, PIPSC National Vice-president who will provide an update on issues to members and how PIPSC is working on their behalf. 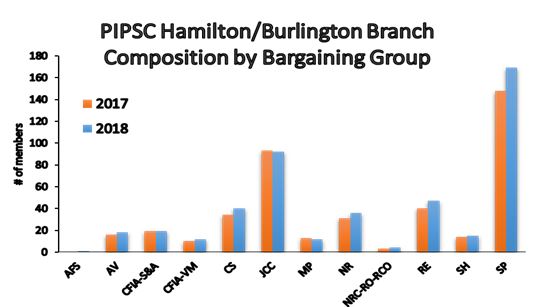