REPRESENTATIVES OF
THE REGIONAL EXECUTIVE:

Marcus Peck called the meeting to order. Marcus confirmed no Friends of the Committee had expressed interest in participating in the meeting.

2. Round Table of Introductions

Since Colin O’Brien was unable to attend the first meeting of the Committee in May, the group introduced themselves.

The Agenda was reviewed. Some items were re-ordered, the item on Social Media Strategy was deferred, and the following item was added to the agenda: review of outstanding action items.

The meeting minutes from meeting of May 25-26th were tabled for approval.

6. Review of Demographics Provided by PIPSC

The Committee discussed how best to use this information to inform decisions. It was felt that it would be useful in selecting geographical areas of focus for outreach events, and for identifying areas with a lot of young members that may not have representation on the committee, either through members or Friends. It was also felt that the demographic information could be used in conjunction with the survey (Item 7, below) both to provide context around response rates but also to be used together for decisions around future Committee goals.

Nick has taken the lead on the member survey. There was a lot of discussion about the questions to include and the Committee decided that the survey needed to be short and directed to just members under 40. Catherine Pinks was asked if it was possible to get such a specific email list. She said she would check with PIPSC.

In the meeting an 8 question survey was drafted. Questions focused on communication, work place issues, and engagement. Nick sent a draft out to the Committee for proof reading and review. After the questions are finalized they will need to go for translation.

To increase response rates, the committee discussed having a draw for prizes from among the respondents. It was thought that 1 draw per province would increase participation as it increases an individual’s chance of winning. Kim Skanes was asked about purchasing prizes (4 X $50) and said it would be taken to the executive for discussion.

There was discussion around the survey platform. Survey Monkey is a free online platform, but the free membership limits the number of responses. A paid membership that meets the requirements of the committee would cost ~$300 for a year. Other platforms were discussed. The potential to use an account already held by PIPSC or the possibility of sharing the survey monkey account with other young professional committees was discussed. The cost of the Survey Monkey membership was discussed with Kim and she agreed to take it to the Executive.

ACTION: C. Pinks - check with PIPSC to see if an email list of Atlantic region members under 40 can be acquired

ACTON: K. Skanes - take request for the approval of the purchase of 4 prizes and Survey Monkey membership to the Executive

The discussion of the logo was timely as visibility items were desired for the Youth Symposium planned for the PIPSC AGM the following month (November).  The AYPC logo was drafted and sent the Regional Executive for approval. The logo consists of the PIPSC Atlantic Region’s lighthouse with AYPC-CJPA above the lighthouse and PIPSC- IPFPC below.  The logo was accepted by the Regional Executive while the meeting was in session and approval for the purchase of sweatshirts with the logo.

Kim Skanes presented what she knew of the upcoming Youth Symposium in November. An agenda for the symposium was not available.

The Committee asked Kim for guidance on training. Kim suggested members look at the Canadian Labour Congress, the Broadbent Institute, or other training providers. PIPSC does not have relevant training opportunities.

14. Update on connection with like-minded groups

Nick presented an update on his communications with youth and labour groups. Since the first meeting Nick has reached out to the Quebec Region Young Professional Committee, the Halifax-Dartmouth Labour Council, and participated in a conference call with the Public Service Inter-Union Youth Caucus. Nick’s notes from the conference call are included in Appendix 4. Nick recommended that all committee members find the time to attend one of the upcoming calls. He said the discussions were very motivating. The next conference call is scheduled for November 6th 2017.

Christine reported on a discussion she’d had with a member of the PSAC Young Workers Committee in St. John’s. The structure is different in PSAC in that the YWC is local and focused in the St. John’s area. They offer training to members, offer a safe space for Youth and are active locally.

The Committee would like to plan an outreach event during the Atlantic Regional Council in May 2018. It was decided that more time was need to discuss the event, and that the survey would help inform the type of event to hold. To that end, a stand-alone meeting was discussed. The group felt that holding a meeting in March 2018 in Halifax at the PIPSC office would be a cost-effective location and provide advance time for planning. March 16-17 was proposed. The Committee decided previously to try to rotate the meeting Chair, so Josh Fox was chosen as Chair for the next meeting.

At the inaugural meeting of the Atlantic Young Professionals Committee (AYPC) on May 25-26 2017, the committee members requested demographic information from the Regional Executive. The information was provided and is summarized here. This information can be used to inform the Committee Membership criteria, geographical areas of focus for events, and other activities of the Committee. This is a preliminary summary. 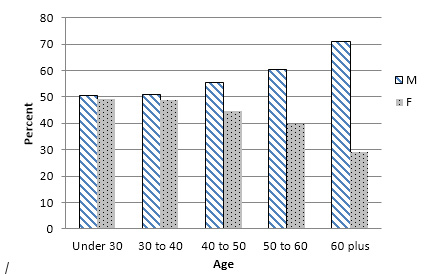 Figure 1. Percent of male and female members within each age group for the PIPSC Atlantic Region.

Table 1. Summary of the Atlantic Region’s demographics by gender and age category.

Provincially, Prince Edward Island (PEI) has the highest proportion of members under 30 (5.3 %), with all the other provinces in the Region having less than 4% in that category (Table 2). Conversely, PEI has the lowest proportion of 30 to 40 year olds (17.4 %), with New Brunswick (26.1%) having the highest. For sheer numbers, New Brunswick has the most members (436) under 40, which is approximately 11% of the Atlantic Regional membership.

Table 2. Summary of the Atlantic Region provinces’ demographics by gender and age category.

Meeting notes prepared by N. Isenor (edited by L. Nasmith for inclusion in the meeting minutes)

a.      Office of the Auditor-General

b.      Other departmental presentations

a.      Entry and Advancement (Marianne)

a.      Follow-up consultations or survey

Follow up; introduce our group to PIPSC attendees whom were in attendance

The inter-union caucus was formed some time ago and is a collection of and co-ordination across classification, non-union, union (funded by unions).

The Inter union youth caucus has a FB page that I would highly suggest you join. A great resource https://www.facebook.com/interunionyouthcaucus/

“Millennial Voices: Informing the Future of Canada’s Federal Public Service” is the resulting summary report based on the ideas received from the event. We hope you will read it and share it widely for discussion.

The report can be found here http://psac-ncr.com/millennial-voices-informing-future-canadas-public-service#.WUmteLYqdY0.facebook

a) ADM forum. The committee presented finding from the report. Spoke to some core issues that have lasted generations and continue to be supported. Which was related to providing language training to employees with less than 5 years of service remaining, The ideas were related to providing training earlier in ones career as a way of ensuring better value for training dollars.

Nick -  I made a comment and brought some regional perspective to the call by added a comment around the quality of language training within the regions being more difficult to learn as well as the “fairness” of language policies that are at time not reflective of rates of bilingualism in Canada. Which from an Atlantic Regioan young person’s point of view, basically puts the government jobs out of reach for many people in our region.

b) National defense. A comment was made that the environment was intimidating as many attendees from National Defense wore uniforms. They mention this as by the end of the presentation, the entire room of generals was very welcoming and caring about youth issues.The generals are in support of clear job descriptions for their staff as having those in place allows for a smooth transition from the forces to the workplace.

F) One of the members of the caucus participated in a panel discussion on the Ottawa morning CBC radio show. Have a listen http://www.cbc.ca/news/canada/ottawa/programs/ottawamorning/millennials-the-public-service-1.4167136

Doug Hargar, one of the co-chairs of the committee sought ideas on additional forums in which they could present their findings. I mention an opportunity to engage regions and mentioned I would bring the idea to our group for discussion and next steps.

The call lasted about 2 hours and was filled with great discussion that motivated me so much it did take some time to come down from the energy from the call. I was one of two people on the conference line and to their credit, they were sure to include us. I mentioned I would do my best to ensure we had more than two people from the regions and encourage AYPC members to consider joining the next call.