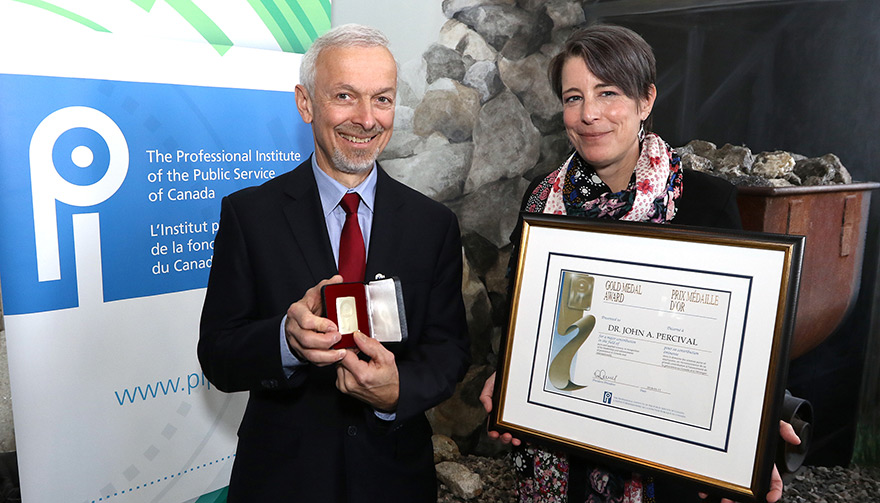 On Friday, April 13, 2018, at a celebration to mark the 176th anniversary of the Geological Survey of Canada (GSC), President Debi Daviau presented the PIPSC Gold Medal Award to Dr. John Percival to recognize his leadership and advancement of geoscience in Canada and internationally. His expertise has proven essential for land use decisions and the promotion of social and economic development in Canada and in countries around the world. An active PIPSC member, Dr. Percival currently heads the GSC’s Ore Systems Research Section at Natural Resources Canada.

President Daviau commented: “Dr. Percival is an example of the role model that the Institute’s Gold Medal is intended to honour. His innovative work has advanced the field of geoscience in Canada and abroad.”

In 1984, Dr. Percival’s discovery of a block of deep-crustal rocks up-thrust 20 kilometres to the surface in the Kapuskasing structure of Northern Ontario led to the launch of Lithoprobe, Canada’s national geoscience program, recognized as one of the world’s most successful deep investigations of Earth’s structure.

Dr. Percival has pioneered innovative methods for geological mapping, leading to new discoveries of gold, base metals and diamonds in Canada. These success stories illustrate the leverage of publically funded geoscience on private sector investment.

Geo-mapping is essential for informed land-use planning (zoning, recreation, development, protection) and thus for the execution of programs by governments at all levels. It plays a key role for industry in the exploration for, and development of, mineral and energy resources, thereby providing employment and royalties for northern communities and hope for their future.

“The tremendous contribution dedicated professionals like Dr. John Percival make to the public good confirms that the federal government has a unique role to play in scientific research. The federal government is responsible for creating and maintaining a climate in which fruitful research can take place and flourish. Scientific research is a critical component in our success as a society – whether it is our ability to protect the health and safety of our fellow citizens, preserve our environment, or ensure future economic prosperity,” added President Daviau.

Dr. Percival has represented Canada as an advisor for United Nations projects. He has often been called upon to lend his expertise to international geoscience missions to developing countries. These missions aim to enhance the adoption and application of Canadian knowledge and technology to support sustainable development. Dr. Percival’s work is also widely applied in Australia, South Africa, Brazil and the United States.