The last union-management meeting, which took place on September 28, required a lot of preparatory work on my part. First, a preliminary report was distributed to all our members. In this first report, I tried to explain the root causes of dissatisfaction by integrating all levels of the organization, including supervisors and the biologists themselves. The initial idea of this first report was to demonstrate that there was an imbalance in the workloads given by supervisors and that they did not assign enough responsibility to biologists in the final stages of publication, particularly for the interpretation of the results and for writing. This report was rather poorly received, although only 15% of our members made comments, generally negative. Many found it blunt and asked me to soften the tone. Others strongly disagreed with including supervisors as a source of dissatisfaction, even partial, and asked me to focus on the problems with management itself. It is true that the survey showed that 85% of employees were satisfied with their relationship with their supervisor while only 40% were satisfied with management’s work.

At the last union meeting in June, I asked the biologists to provide me with information that could potentially contribute to their career advancement. The aim was to answer the following three questions:

1- Do you consider that you are underutilized in your team as a biologist, for example, that you could be more involved in interpreting results and writing published materials?

2- How many projects have you participated in over the last 25 years that have never led to a publication?

3- Please list the projects in which you have participated and which have not yet been completed, including the start year of the project, its short title, the duration (year), the approximate time invested (in months), the funding (optional) and the reasons why the project has never been completed based on these criteria: 1) no conclusive evidence, 2) lack of funding, 3) lack of time (or refusal of researcher to delegate responsibility to junior staff).

(Wording from the last meeting minutes in italics)

I didn't get answers from anyone.

The second report prepared for the meeting was much more effective at rallying the membership. However, it included a serious accusation against management. Management was suspected of putting pressure on researchers to no longer allow their biologists to appear as first or second authors in publications. This report was read by management prior to the union-management meeting. We had decided two days before the meeting to conduct an investigation to verify these allegations (which Jean Bérubé did) but the accusations were groundless. During the meeting, I had to remove two paragraphs from the report. Jacinthe suggested that I combine this meeting with the meeting with the Department's classification team and personnel branch in Ottawa, where we could discuss these points in more detail.

This meeting was held online on Thursday, October 25, with the classification team in Ottawa and included Director Line Décarie, the Director of Personnel at NRCan, Ann Thériault, Chair of the NRCan consultation team, the union official involved in the job classification process, Jacinthe Leclerc, Élizabeth Gauthier, Caroline Rochon, Don Stewart and Jean Bérubé. The document used is similar to the one for the union-management meeting with a few additional items, minus the allegations against management. We asked for an explanation of why the classification team was using our old job descriptions to evaluate our positions rather than proceeding directly with our updated work descriptions, criticizing their methodology, which I consider counterproductive. They told me that they wanted to apply the same procedure to everyone, even if it meant checking with the supervisor and the employee afterwards, using the new updated descriptions where applicable.

In addition, I pointed out, without insisting, that our salaries had been unfairly affected in the last collective agreement. This did not directly concern the classification team, but I mentioned it in case they had direct contact with a Treasury Board representative.

The whole meeting went well and consisted essentially of an information exchange, which is reported in the document I sent you in October in the most recent revised version of the document.

Two new definitions will be created for biologist positions (BI-02 and BI-03) specializing in genomics, based on the current definitions at Agriculture Canada. You will likely find that the new definitions describe your duties more accurately. An effort will also be made to improve the existing definitions for BI-02 and BI-03 positions, allowing lab managers who manage research budgets and supervise students or technicians to advance to the BI-03 level. The aim will be to convince the personnel office to relieve researchers of administrative duties, but above all to recognize the administrative and accountability duties given to biologists. Second, the objective will be to convince Treasury Board to relax the rules in terms of the biologists' contribution to publishing, by removing the requirement that biologists design the research projects. Instead, their participation in the interpretation of the results and the writing of publications should suffice to become a BI-03.

However, it will be necessary to establish a productivity threshold (by number of pages) for a biologist to be promoted.

A new BI-04 position could possibly be created in the field of genomics. Employees working in this position would be responsible for the technological transfer of research related to parasite control of forest pests and pathogenic diseases to other NRCan research centres, at the provincial level and in the private sector!

There was a meeting in October between the SP Bargaining Team and Treasury Board (TB), the December meeting having been cancelled. This meeting was essentially an exchange of information. The TB's response was submitted for January. For the most significant changes to the collective agreement requested by the SP Bargaining Team:

“family”, except where otherwise specified in this Agreement, is defined as father, mother (or alternatively stepfather, stepmother or foster parent), brother, step-brother, sister, step-sister, spouse (including common-law partner), child (including child of common-law partner), stepchild, foster child or ward of the employee, father-in-law, mother-in-law, son-in-law, daughter-in-law, grandchild, grandparent, any relative permanently residing in the employee’s household or with whom the employee permanently resides, and any person for whom the employee has a duty of care, regardless of residence.

time spent on such leave for more than three (3) months shall not be counted for pay increment purposes;

time spent on such leave for a period of three (3) months or less, shall be counted for pay increment purposes.

The Employer shall grant leave with pay under the following circumstances:

Designated security level of the penitentiary

Replace current allowances with $2500.00 allowance regardless of the security level.

This Memorandum is to give effect to the agreement reached between the Employer and the Institute in respect of employees in the Applied Science and Patent Examination (SP) bargaining unit.

Notwithstanding the Employer’s position that classification is an exclusive employer authority and the Institute’s disagreement with this position, the employer is committed to engaging in meaningful consultation with the Institute with respect to the review and redesign of the SP Occupational Group structure, followed by meaningful consultation regarding Classification Reform, relating to the development of job evaluation standards for the SP Occupational Group.

Meaningful consultation on the Classification Reform will include consultation with the Institute on the development of job evaluation standards which reflect and evaluate, in a gender neutral manner, the work performed by the employees in the SP Occupational Group. It will also include ongoing dialogue with respect to providing employees with complete and current job descriptions detailing the specific responsibilities of the position.

The issue of wage increases is always the last item to be negotiated with the TB in collective bargaining. My document, submitted in June, has been taken into consideration but i am not yet sure which of the three options proposed will be considered in the negotiation. They have not yet completed their strategy in this regard. This item will probably not be discussed until June.

The new program will include a number of key features;

The results gave Debi Daviau an easy victory. The members recognized the substantial contribution she made during her last term. Note also the surprising, easy victory for Stéphane Aubry, whom most of you know. Two former pro-Debi candidates were ousted from the Committee. We therefore have a Quebecer among the full-time Vice-Chairpersons of the Board as well as a representative of the SP Group, Norma Domey. The only unfortunate thing is the win by Gary Corbett, a former PIPSC President, who is against Debi's vision, fortunately only a part-time Vice-President. We hope that this new Committee will succeed in working together in unity. As President of the Quebec Region, Yvon Brodeur was re-elected, not surprisingly. We wish him success in pursuing these activities.

Aude, after many years of service and involvement in the union, decided to take a break and leave this responsibility to someone else. First of all, we thank you, Aude, for all the work you have done for the union in organizing the meetings and for serving as Treasurer.

Since no one else wanted to take over this position, Sébastien Clément stepped up again to serve on the Sub-Group's Executive Committee, for the first time as Treasurer. Aude will help to familiarize him with his new duties, which will take no more than three hours a year.

A lively discussion took place towards the end of the meeting regarding the location of the meetings. Some prefer that they take place at the LFC after work, to attract as many people as possible, others prefer the atmosphere of a restaurant or bistro. It was concluded that important meetings where we would have a lot of information to share would take place at the LFC from 5 to 7 p.m. and that less important meetings, organized around a theme, could take place at a restaurant or a bistro.

With respect to the organization of meetings, NO ONE WANTED TO COMMIT TO ORGANIZE them other than Don. Pierre had a good idea, suggesting we write down all the names of the members of the Sub-Group and put them in a basket. The person whose name is drawn by a member of the Executive Committee in front of the other members of the Board and Pierre Godbout would be the organizer for the next meeting.

To complete this, Georges intends, after the holidays, to identify potential restaurants and caterers located near the LFC in order to facilitate the work of the organizer, who would only have to call to make the reservation or order.

A mobilization strategy was developed in 2018 to give PIPSC greater visibility in the media and with the employer and Treasury Board. This strategy was presented at our meeting in Vancouver by Suzel Brousseau, Senior Negotiator for the SP Group. As part of this approach, they asked us to support the Bargaining Team by taking a group photo with several people carrying the slogan "I support my Bargaining Team". The photo was taken at the end of the meeting by Catherine Béliveau. Thank you, Catherine! 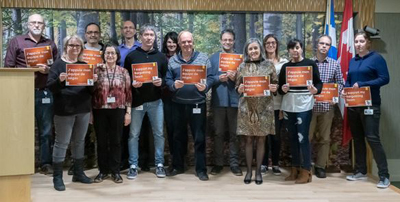 I hope that this report will encourage you to keep a positive attitude in our mutual fight!

Wishing you all a happy holiday season!

President of the SP Sub-Group,