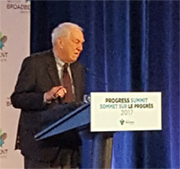 The Progress Summit theme was to “Change the Game” for a better country, for justice, democracy, and sustainability. Canadians need to fight racism, fight for well paid full-time employment; this is a call to action.

Welcoming speaker Ed Broadbent encourage the audience to “Change the Game, Change the World. To push back and keep pushing forward against the inequality against democracy.”

Ed reported there is a “20 percent drop in Canada of citizens who identify themselves as middle class”.

Optimism for the future is missing from Canadian society and as evidence of the lack of leadership from the federal government, despite campaign promises did not deliver with the budget. Mr. Trudeau “chickened out. Mr. Trudeau it’s time to deliver!” Mr. Broadbent stated.

“Our country provides for the many and not just the few.” Mr. Broadbent continued.

“Let’s Change the Game.” said Mr. Broadbent to end his speech. Ed Broadbent1 at over eighty years old continues to be optimistic for the future of Canada.

Lei Eigo Progress Summit speaker and a former Trump Hotel employee reported that the Trump Hotel may be five star service there are not five star jobs making this a reality for the billionaire and his family.

- Ed's concern for the deepening of inequality in Canada has been a consistent theme in all of his professional and volunteer endeavours. First elected to Parliament in 1968, Ed served as an MP for 21 years, 14 of which were spent as leader of the New Democratic Party. During his time in Ottawa, his focus was on Aboriginal and economic rights, women’s equality, child poverty, ethics in government, and tax equality. The founding president of Rights & Democracy, Ed has a Ph.D. in Political Theory and has taught at several prestigious universities. He has been invested as a Member of the Privy Council (1982), Officer of the Order of Canada (1993), and Companion of the Order of Canada (2002).

Dr. Felicia Wong representing the Roosevelt Institute1 spoke to the attendees and said “We cannot ignore that a candidate ran and won on a platform of outright hatred and misogyny.”

The Democratic Party is a party of “No”. There is too much capital and too much labour sitting on the sidelines. America needs to rethink the idea of the state. Americans love freedom but must prioritize Freedom from domination by giant companies.

Democrats have become lost over the last 20 years. Obama left no economic “footprint” behind. However, Trump makes American’s feel safe. Trump gives the message he knows how to run the economy. Trump makes them proud to be a white Americans; they felt embarrassed to be white under Obama.”

More than ever before unions are fighting for a fair and equal country for all Canadians. Unions are being forced to reach out beyond their existing memberships to shape public opinion, to drive policy and win lobby campaigns. The conversation is changing to find and recruit new supporters in this digital-first world.

Unions are trying to lever Social networks of progressive Canadians who share labour’s values. The first consideration is to build lists of email addresses and create a “digital army” of supporters who will sign petitions, build a relationship with labour not based on government messaging, and represent a bridge to Canadians that has never existed before.

Techniques for doing this are: