While Budget 2018 had announced $1.7 billion of new funding for science research, federal scientists were not quick to rejoice, as much of the money allotted was in direct responses to the findings of Canada’s Fundamental Science Review, which completely ignored government science and its pool of public science talents. Once again, the 2019-20 Budget is no different than the last one when comes to significant new funding for public science.

Canadians who care about public science have had some good news to celebrate since the election of the Trudeau government. It started with protections for scientific integrity and the government’s agreement with PIPSC, the union representing its scientists, to enshrine those rights in collective agreements and government policies. It continued to engage in replenishing the ranks of federal scientists, engineers and researchers over the past three years by hiring 1,500 positions in an attempt to fill the science gap left by the previous government’s waves of cuts.

On broader science issues, PIPSC salutes that Budget 2019 is also moving in the right direction for science students. Students receiving federal research grants will now be able to benefit from parental leave under EI. Federal granting councils will also be able to expand parental leave coverage from 6 to 12 months for fellows and post-docs. 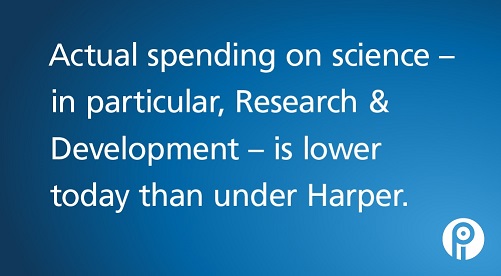 The federal government’s actions in recent years imply that its role is less about participating in basic research and regulatory science, and more about channeling federal science money to the private sector and universities with the hope of stimulating innovation.

This strategy misses the mark.

Think about some of the most fundamental needs of Canadians and our economy. We rely on public scientists to ensure the safety of the air we breathe, the water we drink and the food we consume. As our communities grapple with the impact of climate change, the importance of public scientific capacity cannot be overstated. And yet, with a couple of small exceptions, basic research and government regulatory science are mostly absent from Budget 2019.

The Canadian Food Inspection Agency (CFIA), Health Canada and Transport Canada are getting a total of $219.1 million over five years pertaining to the consolidated regulatory roadmap, though the announcement remains vague. New processes involving the digitalization of CFIA regulation work and standards could impact the work of our food-safety scientists. They should be consulted on these changes so their important service to Canadians is not disrupted.

Another glimmer of hope is the establishment of a new Strategic Science Fund, scheduled for 2022-23 after lengthy consultation with third-party research and non-government science organizations. The commitment remains vulnerable to the results of the next election. Should the government push ahead with a strategic funding agenda in the coming years, public scientists should be at the centre of these consultations.

Whether it’s R&D or science-based regulation, PIPSC believes there is a need for Canadians to have increased access to public science. The dangerous trend of underfunding public science should be and can be turned around. The Chief Science Advisor must develop metrics to assess and report on the government’s scientific capacity.

As the union representing 15,000 public service scientists, PIPSC is ready to help.

Over 15,000 federal scientists are represented by the Professional Institute of the Public Service of Canada (PIPSC). These scientists are tasked with protecting, among other things, the health and safety of Canadian food, water, transportation systems, buildings and consumer products. They also protect the environment and promote the vitality of our economy through innovations in science and technology.