Newsletter from the RMG - Spring 2018

Welcome to 2018 and all of the challenges facing the Retired Members Guild (RMG). How does the old saying go: “Challenges present us with opportunities!”

Bill C-27, which is trying to take away our Defined Benefit Plan and give us an inferior Targeted Benefit Plan, is being fought with passion. The RMG, along with others, has been successful in stalling the Bill and it looks like the Liberals are trying to find a way to kill the Bill and save face. Be watchful, they’re not finished yet!

In 2017, we made special efforts to increase our visibility inside and outside Professional Institute of the Public Service of Canada (PIPSC) and we were successful on both counts. Outside PIPSC, we have RMG members in more than 15 organizations including The Canadian Labor Congress, The National Association of Federal Retirees, Council On Aging, Congress of Union Retirees of Canada, Canadian Association Retired Persons, to name a few. Inside PIPSC, we are active with many of the groups however, there still remains the ongoing negative perception that: it will cost  PIPSC money to support us, which is untrue; we take up places that working members want; younger workers are intimidated when we run for office against them; and so forth. Fighting these stereotypes is, and will be, an ongoing situation. On a few occasions, PIPSC groups have come forward and asked us to help them, for example: to Chair or work on election committees; provide members to be trainers, facilitators, & speakers; to be members of executives; work on many committees; provide Groups with mentors; & so on.

Not our finest hour by a long shot. Apologies to Mr. Churchill, “As long as there is a PIPSC, we’ll fight them at the offices; we’ll fight them in Miramichi and we’ll fight them in Parliament”! President Daviau, in agreement with the Computer Systems Group, proposed that the government nix the current system and develop a new system. The old system is a disaster and no amount of repairs will get it to operate properly besides our members who are waiting for their retirement pay to be corrected. Phoenix has made members afraid to retire or join the RMG because no one wants to have their pay “adjusted”.

First, let me welcome our newest chapter, which has been formed in Newfoundland. The Avalon Chapter elected Gary Moore as their first President – Congratulations!

Next, PIPSC will soon be sending out an invitation to all members recruiting volunteers to deliver lunch-time sessions on subjects like “Pensions”.

What’s on the RMG agenda for this year? We are going to: examine the role of the Vision Committee; improve our member communications; increase activities for members; advocate with the various Groups to allow greater RMG participation; recruit lapsed and new members; improve the value of your membership; search for additional Service Plus opportunities; protect your pensions; work to improve healthcare benefits; and represent your interests wherever and whenever possible.

This year, there will be a NEW PIPSC ELECTION PROCESS. We will be electing ALL the Executive positions at once. I am guessing, but I imagine that we will be using a combined paper and electronic form of vote registration system. This should allow for greater member participation.

We need your voice to help us maximize our value to you. If you have suggestions or comments for us to consider, please get in touch with me or any member of the executive. For the latest news, check the RMG website at www.pipsc.ca/groups/rmg

The problems with the Phoenix Pay system is now into year two. It cannot be fixed, a new pay system is required. Those who retired before Phoenix was implemented have not been affected, so far. However, many of our members are postponing retirement as they are worried, and rightly so, that they may not receive the correct pension, any pension, back pay owed or a combination of all.

If you think you have not been paid properly upon retirement contact PIPSC at phoenix-help@pipsc.ca

By not paying you properly the employer is in violation of your collective agreement and you may be able to submit a grievance.

His commitment to Institute members was deep and unwavering. He will be missed.

We will remember him with respect and gratitude. He served on the PIPSC Board of Directors from 1981 to 1999. Arthur served Institute members with distinction in a number of capacities over many years, notably as National Capital Director, Chair of the Engineering and Land Survey (ELS) Group, President of the Retired Members Guild, and member of the Advisory Council, among many other contributions.

He received a Life Membership Award in 1995

We will remember him for the outstanding rigour and professionalism with which he handled the various responsibilities assigned him.

Bill C-27 is an Act to amend the Pensions Benefits Standards Act. It had its first reading in the House of Commons on October 16, 2016. It establishes a framework for target-benefit pension plans in the federal private sector and for Crown corporations. Bill C-27 will allow federal employers with defined-benefit (DB) to rid themselves of the legal obligation to deliver promised and already-earned benefits.

The employer has indicated that it will not currently affect the core Public Service & current employees will not be affected.

However, the New Brunswick (NB) Government in 2012 renounced their promise to pay already-earned pensions for Government employees and it will affect PIPSC members in NB. This has resulted in a class action lawsuit and is still not resolved.

If Bill C-27 is passed you could be affected.

For more information on Bill C-27 please refer to the PIPSC website. This Bill must be defeated.

DID YOU KNOW THAT:

We are the oldest Federal Government Union in Canada. This milestone will be celebrated throughout 2020 with the wrap-up at the PIPSC AGM in November 2020.

Submit your memories or ideas to 100anniversary@pipsc.ca

November 2020 is also the 20th Anniversary of the Guild.

The first interim executive of the Guild elected in 2001 consisted of:

For those of you who use Social Media, the Guild has a Facebook Page. This is another way to keep in touch with what is happening with PIPSC, within the Government, expressing views on various topics & keeping in touch with former colleagues.

Remember, we are retired and cannot be sanctioned by our employer for expressing opinions about what is happening within the Public Service.

We are the elders, who have the knowledge and the freedom to support our working colleagues who may not be in a position to express their views without repercussions.

The Life Membership Award recognizes outstanding service of enduring value to the Institute by a regular or retired member of the Institute who has demonstrated leadership for at least ten years. 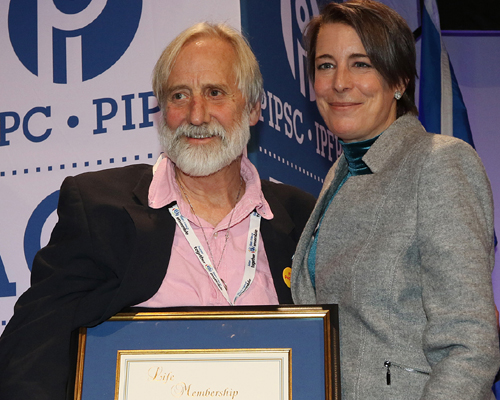 Have you got an article/information/event/pictures you would like to submit for consideration for the next RMG Newsletter? Please send your articles, in text format and pictures to the publication’s editor Pat Kinnear at RMGNewsletter@pipsc.ca
Published on 18 May 2018
Share