V.P. Aubry’s InfoCapsule: To be unionized or not

V.P. Aubry’s InfoCapsule: Should I join the union?

The labour movement in Canada dates back to 1872. At the time, the movement was considered illegal, but the printers of Toronto fought and won the right to a 9-hour work day to replace the 10-hour work day that prevailed at the time.

In the hundred years that followed, the labour movement gained momentum and greatly improved the working conditions of all Canadians. Gains were made gradually by workers and they were awarded with basic benefits such as a minimum 40-hour work week, sick leave, maternity leave, good pay, equity, pensions, medical and dental insurance plans.

But in 1980, the situation began to decline. The sense of comfort felt by workers diminished their desire to fight, and unions became weaker. That opened the door to 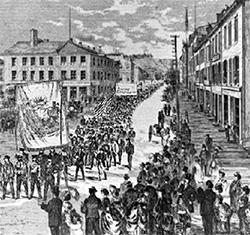 What is unfortunate about this trend is that we accept it. We have let our quality of life decline drastically and stopped standing up for our rights!

What can we do? The answer is simple: help one another.

The ties that hold society together are similar to those in the union movement. Helping a neighbour who is having problems can be likened to helping a co-worker. By joining forces with your neighbours, you make it a safer place to be. And the same applies to work. Get involved in activities coordinated by your union, organize coffee breaks, and more. By building ties with your fellow workers, you can improve your working conditions. I’m not just talking about giving money to a charity, but actually helping out in real life.

This solidarity is key in defending the interests of all. We’re Better Together.

For more on the history of the labour movement, go to