Debi Daviau became President of the Professional Institute of the Public Service of Canada on January 1, 2014. The 52nd President in the Institute’s 94-year history, Debi was elected by universal ballot in December 2013.

An Institute Vice-President since 2010, Debi was first elected to the Board of Directors in 2005 as a Director representing the National Capital Region.

As a Computer Systems Analyst at Human Resources and Skills Development Canada, Debi first became politically active as a Steward in 2003, and became increasingly involved in the union, serving on bargaining and consultation teams, and as President of the Gatineau Branch. 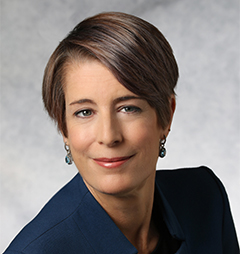 In recent years, Debi has championed issues such as collective bargaining, union-management consultation, and opposing contracting out. Debi fought hard to defend members’ rights defined in the Workforce Adjustment agreement during the massive downsizing over the past two years.

A passionate believer in the union movement, Debi strongly believes that the rights and interests of public service employees should be firmly upheld and vigorously promoted. Better labour-management relations is critical to improving the working environment of the Public Service for the benefit of all Canadians.

Debi will reach out to both government and members to find ways to bridge differences wherever possible. An effective communicator, Debi uses all the electronic media and communications tools available to a modern union.

The Professional Institute of the Public Service of Canada is a national union representing more than 55,000 scientific and professional employees across Canada. The Institute was founded in 1920 and became a bargaining agent in 1967 with the passage of the Public Service Staff Relations Act. Its mission is to represent members collectively and individually by providing bargaining, labour relations and other member services; by promotingand defending the rights and interests of members; and, by safeguarding and promoting professional standards, through a network of elected officials, stewards and members, supported by staff.

Unions are all about working together, which is why Debi is committed to working together in solidarity with our members, other unions and partners to prove that we are better together.

Debi is a proud mother and grandmother.